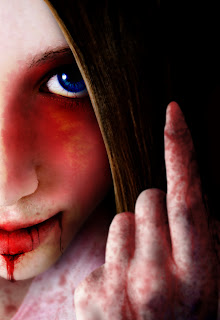 The Evil Eye has been around since the beginning of time. It simply means sending someone a thought that seems intrusive or invasive or has the power to hurt him or her. The bad fortune that results is considered to have been caused by envy. The evil eye is not necessarily considered to be intentional or associated with witchcraft or sorcery. Oddly enough, this thought form could actually be complimentary in nature. The origins of the Evil Eye are Middle-Eastern and Mediterranean. The concept was introduced into the Americas, South Pacific Islands, Asia, Africa and Australia by European explorers.

Sending someone the evil eye comes from the concept that we all have a Third Eye, located in the center of our forehead. Blinding, fogging or obscuring the third eye is often the intent of the energy’s sender. Most of us have experienced the weird power of the phenomenon. All it takes is a gaze that seems to be unfriendly, indifferent or blank and seems to a couple of seconds too long. We think about it for a few minutes afterwards or perhaps an image of the person staring at us preoccupies our thoughts occasionally for the rest of the day. Perhaps that is why the British and Scottish term for the “evil eye” is “overlooking.” It implies that a gaze has remained too long upon the coveted object, person or animal.

The evil eye is also known as the envious or invidious eye. In Italian it is called the malocchio and in Spanish the malojo (loosely translated as the bad eye) The evil eye is known as ayin horeh in Hebrew; ayin harsha in Arabic, droch shuil in Scotland, mauvais oeil in France, bösen Blick in Germany, and was known as oculus malus among the classical Romans.

The original belief is that any person can harm your children, livestock, fruit trees or any other evidence of prosperity just by looking at the spoils of all your good will and hard work with envy. Ironically, the curse of the evil eye is thought to be provoked by inappropriate displays of spiritual pride or excessive beauty. There is a theory that very famous people and celebrities suffer more personal misfortune than others simply because they are subjected to more “overlooking” and envy than others.

This superstition might have some grounding in evolutionary psychology as usually one animal is thought to dominate or be aggressive to another simply by staring at it for too long. Psychologically speaking, staring or glaring at someone is officially considered an intrusion into your affairs. Apparently, there is a fine line between casting a glance to casting a spell. In these post Celestine Prophecy times, this kind of stare could be compared to a kind of etheric laser beam or amoebic arm that rips open your aura. Others would describe the infliction of the evil eye as the projection of an image (such as the image of the person you have offended or hurt) so that you see only that to the exclusion of all other sight. In other words, you see that person wherever you go or feel that your life’s events are always colored by your dealing with that person. Another symptom is the inability to proceed with ordinary, daily events without feeling somehow compelled to make things right with the person you have often unknowingly offended with your grandiosity.

It is common folklore that the evil eye has a dehydrating effect on its victim. It is thought to cause vomiting, diarrhea, the drying up of the milk of nursing mothers and livestock, problems with the blood, eyesight lack of rain, the drying up of wells, the withering of fruit and impotence in men. Clumsiness, stomachaches, dry coughs, diarrhea, itching, hair loss, dry skin are all thought to be physical symptoms of an evil eye attack e. On the astral level it is thought to cause the drying up of prana, chi, life force and the easy flow of prosperity in life. Part of this image might derive from the idea also, of muddy, murky or poisoned vision that is somehow attached to the victim’s third eye.

Almost everywhere that the evil eye belief exists, it is said to be caused accidentally by envy or praise. Thus the phrase “Pride Goeth Before a Fall” In certain Mediterranean and eastern cultures, one is careful not to praise a child too much, lest it invite the subconscious balancing effect of the evil eye. A classic situation would be the barren woman who praises the newborn baby of a new child. Such praise would be considered inappropriate and thought to bring the evil child. One of the remedies for this would be for the mother to spit, to symbolically “rehydrate” the situation. Also, she may speak ill of the child OT counteract the effects of the praise, which might have malefic effects on the child later.

The belief that individuals have the power to cast the evil eye on purpose is more idiosyncratic to Sicily and Southern Italy, although the belief has certainly spread elsewhere – to the Southern United States and the Latin Americas. Such people are known as jettatore (projectors). They are not necessarily considered evil or envious, just born with an unfortunate embarrassing talent that causes others to avoid them. In ancient cultures, if you were thought to be the possessor of an evil eye, you were often negated by the rest of society and went unrecognized on the street without meeting anyone’s eyes.

Perhaps one of the most familiar preventative measures against the evil eye is the hand gesture. The Mano Cornufo or “Horned Hand” involves extending the first and index fingers from a fist. The Mano Fico or “Fig hand” involves placing the thumb in between first and second fingers. Historically there have been many cures for the evil eye:

In Italy, the evil eye is diagnosed by dripping olive oil into a vessel filled with water. If the oil conglomerates into the shape of an eye than the victim is considered officially cursed. Prayers are recited until the droplets of oil no longer create an eye shape.

In Eastern Europe charcoal, coal or burnt match heads are dropped into a pan of water/. If the items float then the person is considered to be the victim of a curse.

In the Ukraine, a form of ceromancy or candle reading is used to diagnose the curse. Melted wax is dripped from a candle into a pan of water. If the wax spits, splatters, or sticks to the side of the bowl then the “patient” is considered to be under the influence of the malefic eye. Usually the patient is cleansed with Holy Water. He or she is pronounced cured when the dripped wax sinks the bottom of the bowl in a round ball.

In Greece Mexico and other places, the official cure is to invite the culprit responsible for the evil eye to spit in a vessel of the holy water that is consumed by the victim.

In Mexico, rolling a raw egg over the body of the victim is the antidote. Afterwards, it is cracked open and if the metaphysician or healer divines the shape of an eye in the yolks then the person is considered to be cursed. Several eggs may be repeatedly rolled over the person’s body until an egg without an eye if found. Sometimes the egg is placed underneath the person’s bed overnight and cracked open in the morning.

In China the remedy for the evil eye is the Pa Kua mirror, a six-sided mirror that is hung on the front door or placed in the front window to reverse bad energy back to the sender. Some of these mirrors are convex to reflect back the bad “poison darts” or “arrows” of multiple ill wishers and some are concave to reflect energy in a definite direction back at, for instance, a nosy neighbor, whose gaze may have lingered on your garden of tulips for too long. In Feng Shui, mirrors are often used as a cure all to reflect negative energy back at all kinds of things – people, bad architecture, traffic, neighbors, physical obstructions such as trees or rocks or anything else that might considered to be a conductor of Har Shui (negative vibrations).

In India the mirroring back of the evil eye takes the form of small mirrors that are sewn, braided or crocheted into clothing. This mirroring back of bad energy is also familiar to practitioners of Wicca and Lukumi or Santeria. In India, the human eye is also considered to be a mirror of the soul. Indian women wear kohl or heavy black makeup to emphasize their eyes not only to shield themselves from evil eye but also to prevent themselves from accidentally inflicting it on others. In India cords strung with blue beads are placed on newborn babies. When the cord breaks and the beads are lost the child is considered to have a strong enough aura to protect him or herself from the evil eye. Red cords worn upon the wrist or neck are thought to have a powerful effect against ocular malevolence. A silver charm called Eye of Buddha which references the Gautama Buddha is also worn against astral attack.

In Italy, gold, silver or gems carved or cast into the shape of the Mano Fica or Mano Cornufa are used to repel the evil. The most coveted ones are made of red coral, but many versions exist today made of gemstones and plastic. They are worn by men to protect against the withering of the genitals thought to be caused by the bad eye. Also Italian in origin is the Corno or horn or devil’s horn amulet that is thought to protect against the same dysfunction. The women’s version is made from a twig of red coral.

In Arab cultures, superstitious types wear an eye in the form of a stone cast in the center of a hand shaped bone or metal charm A common Egyptian charm is the Buckle of Isis which represents the menstrual pad of the Goddess Isis who was the Mother of all living things. Stuffing a little prayer or spell inside a locket that is hung around the neck is the common European custom for protecting oneself against deadly gazes.

A light worker such as myself might advise you to protect yourself in the following contemporary ways:

Always maintain the belief that nobody has the power to hurt you with a look. This in itself is a very powerful thought form.

Before you go out, imagine that your third eye is actually covered by something that looks like a small pocket mirror. If you are a psychic or a healer then simply close your third eye and don’t open it unless you want to look.

If you are feeling haunted or upset as the result of a “look”, press your thumb hard into the center of your forehead and imagine your third eye quickly flipping. Flick the energy away with your thumb and snap your fingers.

Always remember that what you resist often persists. The phrase “Oh, so what!” is one of the most powerful chemicals in the universe that you can use to dissolve negative energy.