The History of Soap 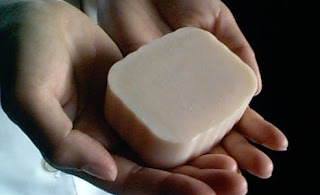 In the course of writing my novels, I have had to research nearly every aspect of medieval life, and still, I sometimes either get it wrong or find myself digging even deeper. So I thought it would be interesting to share my research with my readers.

In chapter 15 of The Treasure of Bloodstone Castle, I have a scene where the hero and heroine argue while she is in the bath. A bar of soap becomes a weapon between them. One of my critiquers questioned whethere there was such a thing as soap in medieval times.

Yes, there was soap. Here is its history.

The origins of personal cleanliness date back to prehistoric times. Since water is essential for life, the earliest people lived near water and knew something about its cleansing properties - at least that it rinsed mud off their hands.

A soap-like material found in clay cylinders during the excavation of ancient Babylon is evidence that soap-making was known as early as 2800 B.C. Inscriptions on the cylinders say that fats were boiled with ashes, which is a method of making soap, but do not refer to the purpose of the "soap." Such materials were later used as hair styling aids.

Records show that ancient Egyptians bathed regularly. The Ebers Papyrus, a medical document from about 1500 B.C., describes combining animal and vegetable oils with alkaline salts to form a soap-like material used for treating skin diseases, as well as for washing

At about the same time, Moses gave the Israelites detailed laws governing personal cleanliness. He also related cleanliness to health and religious purification. Biblical accounts suggest that the Israelites knew that mixing ashes and oil produced a kind of hair gel.

The early Greeks bathed for aesthetic reasons and apparently did not use soap. Instead, they cleaned their bodies with blocks of clay, sand, pumice and ashes, then anointed themselves with oil, and scraped off the oil and dirt with a metal instrument known as a strigil. They also used oil with ashes. Clothes were washed without soap in streams.

Soap got its name, according to an ancient Roman legend, from Mount Sapo, where animals were sacrificed. Rain washed a mixture of melted animal fat, or tallow, and wood ashes down into the clay soil along the Tiber River. Women found that this clay mixture made their wash cleaner with much less effort.

The ancient Germans and Gauls are also credited with discovering a substance called soap, made of tallow and ashes, that they used to tint their hair red.

As Roman civilization advanced, so did bathing. The first of the famous Roman baths, supplied with water from their aqueducts, was built about 312 B.C. The baths were luxurious, and bathing became very popular. By the second century A.D., the Greek physician, Galen, recommended soap for both medicinal and cleansing purposes.

After the fall of Rome in 467 A.D. and the resulting decline in bathing habits, much of Europe felt the impact of filth upon public health. This lack of personal cleanliness and related unsanitary living conditions contributed heavily to the great plagues of the Middle Ages, and especially to the Black Death of the 14th century. It wasn't until the 17th century that cleanliness and bathing started to come back into fashion in much of Europe. Still there were areas of the medieval world where personal cleanliness remained important. Daily bathing was a common custom in Japan during the Middle Ages. And in Iceland, pools warmed with water from hot springs were popular gathering places on Saturday evenings.
Soapmaking was an established craft in Europe by the seventh century. Soapmaker guilds guarded their trade secrets closely. Vegetable and animal oils were used with ashes of plants, along with fragrance. Gradually more varieties of soap became available for shaving and shampooing, as well as bathing and laundering.

Italy, Spain and France were early centers of soap manufacturing, due to their ready supply of raw materials such as oil from olive trees. The English began making soap during the 12th century. The soap business was so good that in 1622, King James I granted a monopoly to a soapmaker for $100,000 a year. Well into the 19th century, soap was heavily taxed as a luxury item in several countries. When the high tax was removed, soap became available to ordinary people, and cleanliness standards improved.

Commercial soapmaking in the American colonies began in 1608 with the arrival of several soapmakers on the second ship from England to reach Jamestown, VA. However, for many years, soapmaking stayed essentially a household chore. Eventually, professional soapmakers began regularly collecting waste fats from households, in exchange for some soap.

A major step toward large-scale commercial soapmaking occurred in 1791 when a French chemist, Nicholas Leblanc, patented a process for making soda ash, or sodium carbonate, from common salt. Soda ash is the alkali obtained from ashes that combines with fat to form soap. The Leblanc process yielded quantities of good quality, inexpensive soda ash.

The science of modern soapmaking was bom some 20 years later with the discovery by Michel Eugene Chevreul, another French chemist, of the chemical nature and relationship of fats, glycerine and fatty acids. His studies established the basis for both fat and soap chemistry.

Also important to the advancement of soap technology was the mid-1800s invention by the Belgian chemist, Ernest Solvay, of the ammonia process, which also used common table salt, or sodium chloride, to make soda ash. Solvay's process further reduced the cost of obtaining this alkali, and increased both the quality and quantity of the soda ash available for manufacturing soap.

These scientific discoveries, together with the development of power to operate factories, made soapmaking one of America's fastest-growing industries by 1850. At the same time, its broad availability changed soap from a luxury item to an everyday necessity. With this widespread use came the development of milder soaps for bathing and soaps for use in the washing machines that were available to consumers by the turn of the century.

The chemistry of soap manufacturing stayed essentially the same until 1916, when the first synthetic detergent was developed in Germany in response to a World War I-related shortage of fats for making soap. Known today simply as detergents, synthetic detergents are non-soap washing and cleaning products that are "synthesized" or put together chemically from a variety of raw materials. The discovery of detergents was also driven by the need for a cleaning agent that, unlike soap, would not combine with the mineral salts in water to form an insoluble substance known as soap curd.

Household detergent production in the United States began in the early 1930s, but did not really take off until after World War II. The war-time interruption of fat and oil supplies as well as the military's need for a cleaning agent that would work in mineral-rich sea water and in cold water had further stimulated research on detergents.

The first detergents were used chiefly for hand dishwashing and fine fabric laundering. The breakthrough in the development of detergents for all-purpose laundry uses came in 1946, when the first "built" detergent (containing a surfactant/builder combination) was introduced in the U.S. The surfactant is a detergent product's basic cleaning ingredient, while the builder helps the surfactant to work more efficiently. Phosphate compounds used as builders in these detergents vastly improved performance, making them suitable for cleaning heavily soiled laundry.

By 1953, sales of detergents in this country had surpassed those of soap. Now detergents have all but replaced soap-based products for laundering, dishwashing and household cleaning. Detergents (alone or in combination with soap) are also found in many of the bars and liquids used for personal cleansing.

Since those early achievements in detergent and builder chemistry, new product activity has continued to focus on developing cleaning products that are efficient and easy to use, as well as safe for consumers and for the environment. Here's a summary of some of those innovations: