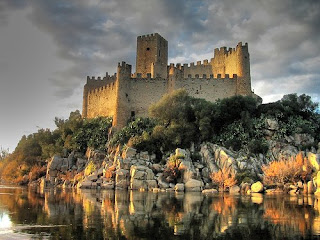 One of the most fascinating aspects that continually draws me into the medieval era, is the mystery and antiquity of castles. Of course, living in western Canada affords little opportunity to see castles first hand. The closest I can come to experiencing a medieval castle is visiting the Banff Springs Hotel. 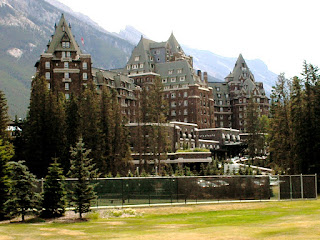 It has a medieval theme throughout and even a wonderful great hall. 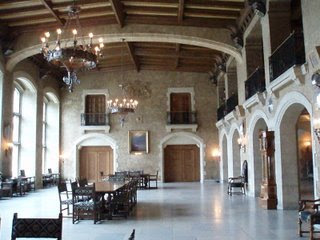 I love castles, everything about them. I think that's why I'm always writing in the medieval era - it was vastly different, more violent, crueler. This opens up a realm of opportunities for heros to stand out.

Here is a fascinating article I found about medieval castles and how they were built. I give the author credits at the bottom of the article.

During the eleventh century many changes were sweeping through Europe and among these changes was an engineering revolution that enabled architectural building with stone. But this engineering growth alone was not enough for the building of large fortresses because that required a substantial commitment of time, resources and money. But there was also a social change sweeping through Europe. Lords and Kings were consolidating large kingdoms and gaining the wealth that made the building of large stone castles possible. In order to protect their lands or to gain a hold in adjoining lands lords and kings built stone fortresses. These stone fortresses were very similar to the Motte and Bailey structures of the previous century and they were often called "shell-keeps".

It was during the twelfth century that the massive stone keeps we normally consider to be medieval castles took shape. As crusaders returned to Europe they brought with them the engineering and design knowledge they learned from the Greek and the Turkish. Both of these cultures were very proficient with stonework and this new knowledge of architectural building enabled the building of large and elaborate stone fortresses throughout Europe.

Castle building reached a feverish climax during the thirteenth century with over five hundred massive and very intricate castles being built throughout Europe. These castles were the masterpieces that we now think of as medieval castles and they had many design and engineering elaborations such as round towers. Up until this century the towers in castles were square but the square shape was vulnerable to battering rams and had blind zones. Round towers were stronger, less vulnerable, and had no blind spots.

It was during the fourteenth century that the building of castles went into decline and then its eventual demise. Further developments in technology, and in particular the development of gunpowder and artillery brought about the demise by making it impractical and futile to spend ten years or more to build a castle that could be totally destroyed by a few days of artillery fire. But the castle didn’t disappear. It evolved into less of a security structure and more of a living quarters for royalty and wealthy families or what we now think of as a Palace.

The medieval castle was an amazing art and engineering form that evolved dramatically over a period of about five hundred years and reflected changes in warfare, culture, engineering and society.

To learn more about Medieval castles visit the author’s website at: Medieval Castles

To learn more about Medieval Knights visit his site Knight-Medieval.com