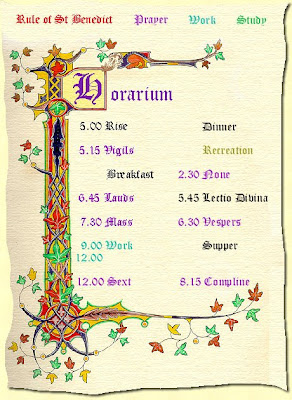 Anyone who is writing a novel set in the medieval era, will need to refer to the Canonical Hours. In the days before clocks, keeping of Canonical Hours was one way to tell time as it was based on the sun rising and setting.

Canonical hours are divisions of time, developed by the Christian Church, serving as increments between the prescribed prayers of the daily round. A Book of Hours contains such a set of prayers.

Canonical hours are sometimes referred to as "offices" because they refer to the official set of prayers of the Roman Catholic Church. These prayers are also known as Divine Office.

This is a sundial found in Italy depicting the Canonical Hours: 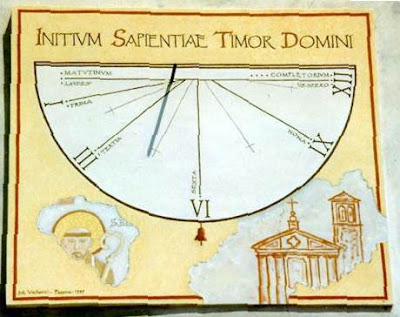 Today, the Catholic Church in North America refers to these hours as the Liturgy of the Hours and as Divine Office in the British Isles.

Religious houses such as monasteries and convents, in addition to Churches, followed these hours of prayer. In my research, there are variations to the start and end times, but in general here are the canonical hours:

Gow funny that you posted this. I am working on my paranormal mystery set in late tenth century England now and just Friday realized I needed to know the canonical hours.

Thanks for that "canonical hours" piece. I am always looking for information like that. It's something I never thought of,but I guess I should have. Again, thanks for that.
Anne G

I also thought, if you don't mind,to link my blog to yours on this. I found the tidbit about the canonical hours very enlightening, and I kind of want to expand on it as a part of my musings on the writing process in general.
Anne G