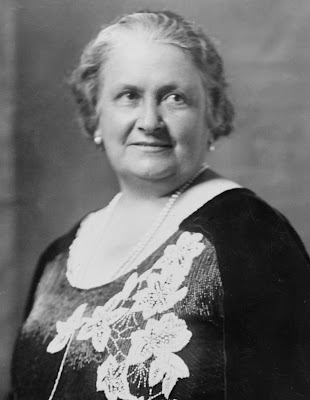 Maria Montessori was born in the town of Chiaravalle in the province of Ancona, Italy in the year 1870 in an era where it was not common to treat children with respect. The old adage applied – Children should be seen and not heart. Her father, Alessandro Montessori, worked in an official capacity for the Italian government and was a respected member of the bourgeois civil service. Her mother, Renide Stoppani, came from a wealthy, well-educated family known for their devotion to the liberation and unity of Italy.

It was her mother who encouraged Maria towards advanced education and convinced her to register at the Regia Scuola Tecnica Michaelangelo Buonarroti in engineering studies at the age of thirteen. She disliked it greatly and knew that this was not a model for an ideal school. She decided to drop out of her engineering program. Her family, friends, and especially her father, all cheered the decision for they were shocked that she would choose such an unlady-like profession.

Much to their chagrin, Maria decided to go to the University of Rome and become a student of their medical program. She graduated with a score of 100 out of 105 in 1896, the first female doctor in Italy’s history.

A month after her graduation, she was chosen to represent Italy in a Women's International Congress in Berlin, Germany. When she returned to Rome, she was appointed as a surgical assistant at Santo Spirito, worked at the children’s hospital, and maintained a private practice.

By 1897 Maria came to the realization that the children she worked with could not be adequately treated in the hospitals and should instead be educated in schools. Towards this goal, she began to devote more and more of her time towards perfecting education. In 1912 she developed The Montessori Method – a method of learning that used nature to meet the real needs of children.

In 1900 she became a director of a small school for 'challenged' youth. Her methods were hailed as experimental, but miraculous. She believed that children should be taught “how” prior to executing a task.

While working there, Maria had a love affair with a colleague, Dr. Montesano. In 1898, Maria gave birth to her only child, Mario Montessori. They vowed to keep their relationship and the identity of the father of her son a secret. They pledged that neither of them would ever marry another person. Montesano failed to live up to his end of the bargain, however, and fell in love with and married another woman while still working with Montessori in daily contact. The pain of this betrayal caused her to leave the school. She sent her son to a wet nurse and later to a boarding school.

In 1907 Montessori actively began to emphasize her theories and methods of pedagogy. She became the director for a group of daycare centers for children of the working class in one of the worst neighbourhoods in Rome. Her pupils were labelled as “wild and unruly”. Yet, under her guidance and methods, they began to respond. She respected the children and always held them in the highest regard and insisted that the teachers she employed did the same.

The success of their work was amazing. Children younger than three and four years old began to read, write, and initiate self-respect. Her method encouraged these underprivileged children to “absorb their culture”. But they absorbed much more than mere reading and writing – they soon progressed to botany, zoology, mathematics, geography, with great ease and spontaneous energy.

Critics complained her methods were too rigorous and harsh. But instead she argued, “I studied my children, and they taught me how to teach them." To hear such a statement today, would not turn heads. In Maria Montessori’s day, however, everyone was left agape and shocked. Because she believed that the learning environment was just as important as the learning itself, her school was the first to have child-sized tables and chairs made for the students. Her schools were often peaceful, orderly places, were the children valued their space for concentration and the process of learning.

Her methods completely contradicted traditional forms of educational. For example, adults often reprimand children about runny noses, but never take the time to teach them how to take care of it themselves. Maria said, “I decided to give the children a slightly humorous lesson on how to blow their noses. After I had shown them different ways to use a handkerchief, I ended by indicating how it could be done as unobtrusively as possible. I took out my handkerchief in such a way that they could hardly see it and blew my nose as softly as I could. The children watched me in rapt attention, but failed to laugh. I wondered why, but I had hardly finished my demonstration when they broke out into applause that resembled a long repressed ovation in a theater. When I was on the point of leaving the school, the children began to shout, 'Thank you, thank you for the lesson!'"

On one occasion, a teacher was late. The eager students actually crawled through the window and got right to work while they waited. Maria created the game of silence, a brief period of meditation that allowed the children to start the day with a sense of peace and focus.

In the latter years of her life, from around 1907 to the mid-1930's, Maria devoted all of her time and energy in founding schools that taught her method throughout Europe and North America. She also traveled to India and Sri Lanka, and until 1947, she trained thousands of teachers in the Montessori curriculum and methodology.
Maria Montessori died in 1952 in the Netherlands after a lifetime devoted to the study of child development. She also worked for women’s rights and social reform. Her success in Italy led to international recognition, and during her lifetime she traveled the world lecturing and training. ‘Educate for Peace’ was her guiding principle which influenced her every deed.

Her work lives on through the Association Montessori Internationale (AMI), the organization she founded in Amsterdam, Netherlands, in 1929 to carry on her work.

Maria made numerous memorable quotations. Following is a collection of her most famous ones: