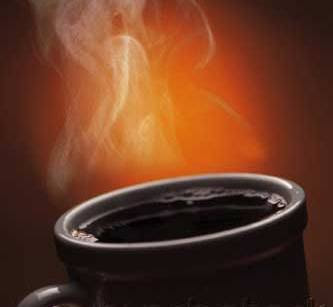 The history of coffee has a rich and fascinating tradition, resulting in gourmet coffee available to you in your kitchen or at your favorite coffee house.

Coffee dates back to the 9th century. Today, a good cup of coffee ties our world together in ways that are truly amazing through the years.

The Origin of Coffee

Kaldi shared his discovery with the local monks, and they used the fruit to stay awake during long hours of prayer. The "mysterious red fruit" spread to monasteries all over the world, starting the relationship between the church and coffee that has lasted for centuries.

Coffee is mentioned in writings as early as the 10th century, and historians since then have followed coffee's history and use throughout the world.

In 1471, not long before Columbus left to discover America, the first coffee house opened in Constantinople. The merchant trade of Venice brought coffee to Italy, where the first European coffee shop opened in 1645. Coffee houses spread throughout Europe and England and later to America. By 1675, there were over 3,000 coffee houses in England, demonstrating coffee's tremendous appeal so many years ago.

Coffee Making Through the Years

How we roast, grind and brew coffee has changed tremendously over the years. At first, coffee was boiled after being crushed by a mortar and pestle, as it still done with Turkish coffee.

Drip brewing started around 1800 in France, about the same time as percolators were invented also. Vacuum coffee makers were invented in 1840 to brew coffee that was clear and without sediment. By the end of the 19th century, espresso machines were developed for brewing coffee through the pressure method. Paper filters were invented by Melitta Benz in 1908. She and her husband patented them and started the Melitta family coffee business, which their grandchildren continue to this day.

Drip coffee makers for home use in the United States became popular after the Mr. Coffee coffee maker was introduced in 1972. Prior to that time, most coffee at home was made with a percolator, either electric or on the stove top.

The rise of the corner gourmet coffee house in America is an even more recent event. Founded in 1971, Starbucks popularized dark, gourmet coffee and expanded on a massive scale in the 1990's. Now there are 16,000 stores worldwide, including 11,000 in the United States and 1,000 in Canada. This rise in gourmet coffee houses has brought a new coffee lifestyle to American society, greatly increasing expectations for coffee quality.

Growing Coffee Around the World

From coffee's start in the Arabian peninsula, coffee has become one of the largest commercial crops grown around the world. Coffees are grown in tropical and subtropical areas, including some of the most impoverished areas of the world. The traditional coffee production areas in are in South America (with Brazil and Columbia as the two largest coffee producers in the world), Africa (primarily East Africa) and Indonesia. Other areas grow coffees that have become prized, including Jamaica, Hawaii, Australia, India, and Costa Rica, winning the hearts of coffee aficionados worldwide.

Coffee has brought amazing changes to our society and our world in the past 1,100 years. Coffee continues to span the globe, connecting us with people far away. The coffee in your cup came from beans grown in an exotic location far away and transported around the world to you.

What will be next for coffee? Who knows, so enjoy your cup of gourmet coffee and the rich tradition that goes with it!

DJ Toman is a lawyer and coffee enthusiast living in Greensboro, North Carolina. He is the author of http://www.CoffeeDaydreams.com, a site dedicated to gourmet coffee and choosing the best coffee makers. Even beginners get helpful tips about how to brew and enjoy the coffee of their dreams.

Mmmm...just love coffee- aroma, taste,comfort...name it! Interesting article Mirella- Thanks!
BTW, have you received your cappuccino machine yet? Let me know.

I also love a good cup of coffee, my husband and I like to calls ourselves "coffee snobs" as we are very fussy with our coffee. I like a dark bold coffee such as Cafe Verona by Starbucks and he likes the flavored ones. no Folgers for this couple .... told you we were snobs!!!!