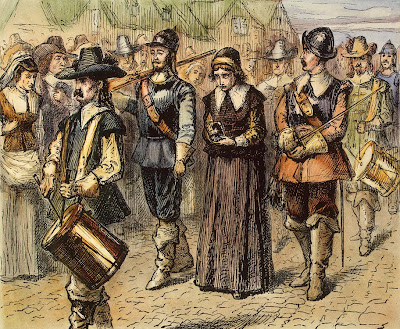 I was married at St Martin-in-the-Fields, London, on 27 October 1633. In 1637 I supported Anne Hutchinson, who preached that God "spoke directly to individuals" rather than only through the clergy. I joined with her and became involved in what was called the "Antinomian heresy," where we organized groups of women and men to study the Bible in contravention of the theocratic law of the Massachusetts Bay Colony.

On October 17, 1637, after nearly four years of marriage, I gave birth to a deformed stillborn baby, who I buried privately.

Because I had sided with Anne Hutchinson in the Antinomian heresy, my husband and I were banished. We settled in Providence, Rhode Island.

Shortly thereafter, the authorities learned of the “monstrous birth,” and Governor Winthrop had it exhumed in March 1638, before a large crowd. He described it thus:

“It was of ordinary bigness; it had a face, but no head, and the ears stood upon the shoulders and were like an ape’s; it had no forehead, but over the eyes four horns, hard and sharp; two of them were above one inch long, the other two shorter; the eyes standing out, and the mouth also; the nose hooked upward; all over the breast and back full of sharp pricks and scales, like a thornback [i.e., a skate or ray], the navel and all the belly, with the distinction of the sex, were where the back should be, and the back and hips before, where the belly should have been; behind, between the shoulders, it had two mouths, and in each of them a piece of red flesh sticking out; it had arms and legs as other children; but, instead of toes, it had on each foot three claws, like a young fowl, with sharp talons.”

Winthrop sent descriptions to numerous correspondents, and accounts were published in England in 1642 and 1644. The deformed birth was considered evidence of the heresies and errors of Antinomianism.

In 1652, we travelled to England, where I joined the Religious Society of Friends (Quakers) after hearing the preaching of its founder and feeling that it was in agreement with the ideas that Anne Hutchinson and I held years earlier. I eventually became a Quaker preacher in my own right.

My husband returned to Rhode Island in 1652. I remained in England until 1657. The next year I travelled to Boston to protest the new law banning Quakers, and I was arrested and expelled from the colony. My husband, who had not become a Quaker, was not arrested.

I continued to travel in New England to preach Quakerism, and was arrested in 1658 in New Haven, Connecticut. After my release, I returned to Massachusetts to visit two English Quakers who had been arrested. I was also arrested and then permanently banished from the colony.

From there, I traveled to Massachusetts a third time with a group of Quakers to publicly defy the law, and was again arrested, but this time, I was sentenced to death.

After a short trial, two other Quakers were hanged, but because my husband was a friend of the Governor, he secured a last-minute reprieve, against my wishes, for I had refused to repent and disavow my Quaker faith.

I was forced to return to Rhode Island, then traveled to Long Island, New York to preach, but my conscience led me to return to Massachusetts in 1660 to defy the anti-Quaker law. Despite the pleas of my husband and family, I again refused to repent, and was again convicted and sentenced to death on May 31. The next day, I was hanged on Boston Common for the crime of being a Quaker in Massachusetts. I died a martyr.

My execution is described by Edward Burrough in A Declaration of the Sad and Great Persecution and Martyrdom of the People of God, called Quakers, in New-England, for the Worshipping of God (1661).

My last words before I died were: “Nay, I came to keep bloodguiltiness from you, desireing you to repeal the unrighteous and unjust law made against the innocent servants of the Lord. Nay, man, I am not now to repent. ”

After my death a member of the General Court uttered one of those bitter scoffs which prove the truest of all epitaphs, "She did hang as a flag for others to take example by." 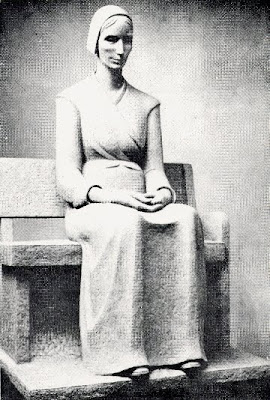 oops I see you did profile Mary Dyer. I saw a reenactor portray her once and I found her so fascinating. She helped pave the way for the freedoms we enjoy today and I'm proud that she was from New England.