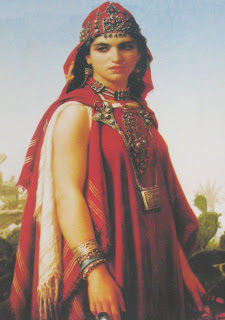 I am Enheduana, and I am the world's earliest known female writer.  My name means "lord or lady ornament of An (the sky or heaven).  I was an Akkadian princess as well as high priestess of the moon god Nanna (Sin) in Ur.  I am a writer of hymns, many of which still exist today.

My father, King Sargon of Akka began the tradition of appointing only the daughters of kings to the post of En of Nanna.  For 500 years afterwards, En Priestesses were so named, just as I was.

Lugal-Ane, a rebellious Sumerian King, temporarily dislodged me from my position, in an attempt to show my imperial appointment to be locally unacceptable.

I wrote a hymn called Nin-me-sara to the goddess Inanna.  The Sumerian people believed that I had written it so effectively that my prayers to Inanna were answered with 9 victories thus quelling 9 battles between the Sumerians and the Akkadians.  These victories allowed my nephew, Naram Sin, who was then king, to successfully unite Sumer and Akkad for several years.  After this historic coup, I was restored to my post as En of Nanna in Ur.

Nin-me-sara was revered as a sacred document and 500 years after my death, during the Babylonian era, it was used as a text copied by students learning to be scribes.  Over 100 clay tablet copies of the hymn were used to create my translation of nin-me-sara thus pointing out how popular the hymn was.  Few Mesopotamian literary texts have boasted as many copies.

I originally wrote it on an alabaster disk and called myself the"zirru of Nanna," a mysterious term which means the embodiment of the Goddess Ningal, the wife of the moon God Nanna.

Historians have noted that my work displays the concept of a personal relationship with the divine, to wit:

I am yours! It will always be so!
May your heart cool off for me
May your understanding... compassion…
I have experienced your great punishment


My Lady, I will proclaim your greatness in all lands and your glory!
Your ‘way’ and great deeds I will always praise!
In addition, she is the first author to write in the first person. Scribes wrote about the King and the divine, but never about themselves prior to En-hedu-Ana.

I also became famous as the author of several Sumerian hymns.  I am considered the earliest author known by name.  The hymns I wrote to Inanna celebrate my individual relationship with Inanna, thereby setting down the earliest surviving verbal account of an individual's consciousness of her inner life.