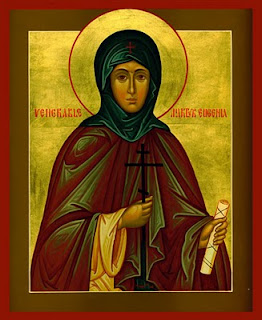 The best of scriptwriters would be hard pressed to match, let alone exceed, my true to life story. It is said that I resorted to what might have been called excesses. At a time when society confined most women to the home, I expressed my independence with such resourcefulness that I showed myself not only the equal to any man, but better than most.

My name is Eugenia, which is the Greek word for noble, an adjective that falls short of describing me astounding character, one that seldom is attained by either sex. I was born in 280 A.D., the daughter of the Duke of Alexandria, Egypt, whose name was Philip and who ruled in the name of the emperor in the land of Pharaohs. I enjoyed every privilege, except that reserved for men, who were free to choose their way of life. A woman of high or low rank could no more wear the churchman scowl than a warrior's armor.

I was not born a Christian but was converted in my youth without the knowledge of my parents who were strongly opposed to the new religion. When it came time to screen suitors for my inevitable marriage, usually one of convenience for the aristocracy, I slipped away, accompanied by a pair of faithful servants, Protas and Hyakinthos, who escorted me to an area far enough removed from my home to assure obscurity. Nearby was a monastery upon which I would look with longing to serve Christ, only to be reminded that only men could serve within this cloister. I hit upon the idea of posing as a man and after some persuasion, convinced my two servants to cut my tresses and accompany me to the monastery to help in my admission. The deception was an immediate failure because the perceptive Abbot Helenon saw at once my delicate features and found no trace of masculinity in my lowered voice. He was so moved, however, by my sincerity that he provided for me stay there, isolating me in a cell where I remained for a number of years in meditation and prayer and in all the studies required of a monk. Finally, I was actually tonsured a monk and any doubt as to my proximity to God were erased when I was found to have the power of healing.

I left the confines of the monastery from time to time in order to be among my fellow Christians and it was during one of these visits that I fell prey to prowling state soldiers ever on the alert for church leaders. Arrested on the usual charge of treason, I was summoned before the duke of judgment (my father) which customarily offered a choice between denying Christ or death. In a dramatic moment my father recognized me, his accused daughter, whom he had presumed dead, and tearfully embraced me, dismissing the entire court to be alone with me.

The joy of being reunited with me brought the even greater joy of learning from my lips about Christianity, with the result that I converted my father to Christianity. This amazing turn of events became all the: more amazing when it is realized that my father, this very same pagan Duke Philip, turned to Christ with so much genuine love that he became a churchman himself and rose to be the archbishop of Alexandria. It was a far higher calling but far less rewarding in earthly considerations. Sought after by the very people who in prior years had sought only to protect him, he was assassinated.

Meanwhile I had gone to Rome to be in the heart of the political and cultural center of the world where I won so many converts to Christianity that I, too, became a target for the pagan state. When finally caught, I remained steadfast in my faith and met death by sword, after which my body was thrown into the Tiber River, only to be recovered by Christians. Although I was martyred on December 25, my memory is observed a day earlier.

I love the fact that she managed to convert her father, that cannot have been an easy task.

I love your blog by the way - it's one of my favourites, and am a regular visitor, and I promise I'll be better at commenting in the future seeing you love comments ;)