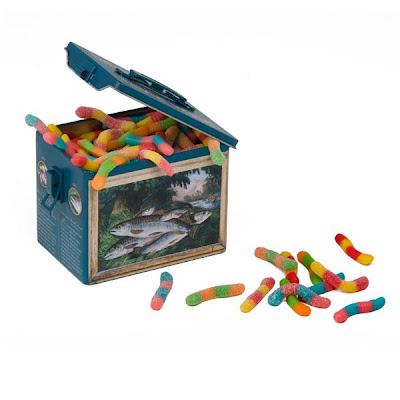 The first gummi candi was invented by a man named Hans Riegel during the 1920s. Riegel owned a German candy company called Haribo.

Gummi candy made its debut in North America in 1982.

The gummi worm, 2 inches in length, was made by another German gummi candy manufacturer called Trolli. Ever since Gummi worms are the most popular gummi candy ever made.

Gummi candy is made with edible gelatin which gives it elasticity, the desired chewy consistency, and a longer shelf life. Gelatin is not new. It has been in use since the time of the Egyptian Pharaohs.

The ingredients are mixed and pumped into a coil candy cooker approximately 128 feet long made of stainless steel that cooks the candy by steam outside of the coil. When it's done cooking the cooker pumps the gummi into a vacuum chamber where excess moisture is removed. AFter the vacuum chamber the candy moves to a mixing station where colors, flavors, acids, and fruit concentrates are added. Next, a starch moulding machine pumps the gummi stock into starch filled mould boards for shaping. AFter curing a while, the gummies are removed from the moulds, packaged, delivered, and sold.

Gummi bears have become so popular, they have their own cult following and even a hit song. Enjoy.

What a nice article, I didn't have an idea how they were made, and the history behind them, those kinds of candies have been my favorites always, I still buy them and really enjoy them.

Just came across your blog! Very interesting - I'll be coming back!