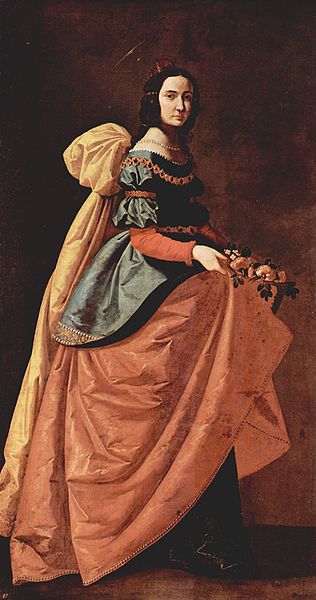 Casilda lived in Toledo during the 10th century.  She came from a wealthy family.  Her father was a Muslim king.

Casilda showed showed generosity and great kindness to Christian prisoners by carrying bread hidden in her clothes to feed them.

But one day, Muslim soldiers stopped her and demanded she reveal what she hid in her clothing.  Slowly she unfolded her gown, but instead of bread, a beautiful bouquet of roses appeared.  They released her.

Although she was raised a Muslim, when she fell ill and refused any help from Arab healers.  Instead, she traveled to northern Iberia, to the shrine of San Vincente near Buezo and Briviesca to indulge in the healing waters there.

Almost immediately, she was cured.  She was baptized at Burgos and lived a life of solitude and penance not far from the miraculous waters of the spring that healed her.

Casilda lived to be 100 years old and died in 1050 A.D.  The Catholic Church later venerated her as a Saint.

The above painting is by Spanish artist Francisco de Zurbaran.  If you look closely, Casilda is carrying roses in her gown.
- Tuesday, April 13, 2010

What a marvellous costume she is wearing.... I wonder at what stage in her life it was painted (eg the Muslim or the Christian period) - last summer my husband and I had a wonderful holiday in Albania and visited a museum of photography where we saw the most remarkable photos of Christian and Muslim female costume through the ages in Albania - the thing that struck us was how variable it was - and how it was almost impossible to guess which photograph applied to which faith -

Wonderfully interesting post as always - thank you for sharing

How beautiful! The legend of Santa Casilda!
Thank you so much for the post.

Have a nice evening.

Thnks for visiting me here.
You're right, I hadn't realized I didn't have a subscribe button, but it is solved now, I think.

Wonderful. I've subscribed and I've added you to my link list on my blog.

the painting was done 500 years after she lived, so it unlikely to bear any resemblance to her or what she wore. It was typical fashion of the 1500s in Spain.