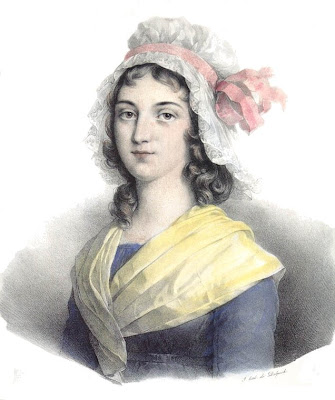 Charlotte Corday was born on July 27, 1768 at Saint-Saturnin, France. She received her education in the Roman Catholic convent in Caen. She was an exceptionally beautiful young woman. When the French Revolution broke out in 1789 she was a staunch supporter of the monarchy. Certain national factions came into existence. Corday sided with the Girondins, a more moderate group, and avoided groups aligned with Marat and Robespierre who wanted to destroy the monarchy.

In 1793, the Girondins were expelled from the national convention, so they gathered at Caen to organize against their opponents. Passionate about their cause, Corday joined them in Caen. She firmly believed that Marat was a most onerous enemy. So she plotted to find a way to meet him. On July 13, 1793, was able to gain an audience with Marat on the pretence of revealing the secrets of the Girondins at Caen. While he was in his bath, she stabbed him through the heart. 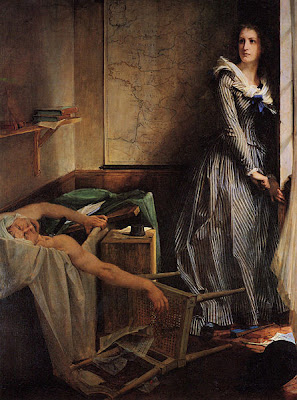 During her trial, Corday remained insistent that she had solely concieved and carried out the assasination. In her own words: "It's only in Paris that people have eyes for Marat. In the other departments, he is regarded as a monster."

She was sentenced to death.

A detailed account of Marat's murder and the subsequent trial and execution can be found in the book "Citizens: A Chronicle of the French Revolution" by Simon Schama.

In the final days of her life as she awaited her execution, Charlotte penned a letter to her father and begged his forgiveness for "having disposed of my existence without your permission."

On the eve of her execution, she wrote that "there are so few patriots who know how to die for their country; everything is egoism; what a sorry people to found a Republic." 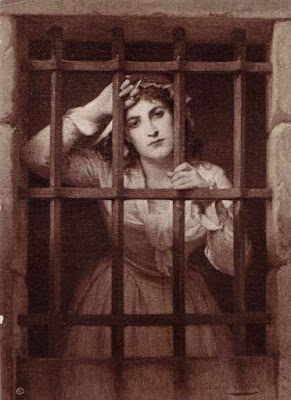 On the day of her execution, she refused a priest. Rather, she requested that Hauer, an officer of the National Guard, paint her portrait. The only way she could reward him was with a lock of her hair. She told him it was a souvenir of a poor dying woman.

A man named Pierre Notelet witnessed the execution and described it in writtenf form:

"Her beautiful face was so calm, that one would have said she was a statue. Behind her, young girls held each other's hands as they danced. For eight days I was in love with Charlotte Corday."

As she faced her death, she remained convinced that she had avenged many innocent victims and prevented many other disasters by her act of assasination. She was twenty-five when guillotined on July 17, 1793.

Heart of the Wood said...

Love the way you tell the stories! What a great blog (and thanks for your kind words too!). Really looking forward to exploring it. Clearly I am never going to get any work done around here!

Fascinating blog! I loved the way you tell us the story of Charlotte Corday.

You can be sure I'll come back!

Thank you so much for visiting our baroque court.

Thank you for telling the story of Charlotte Corday. She is in my mind and heart a great woman of history that has been over looked all to often.She is, I feel, a brave young woman of insight and conviction...