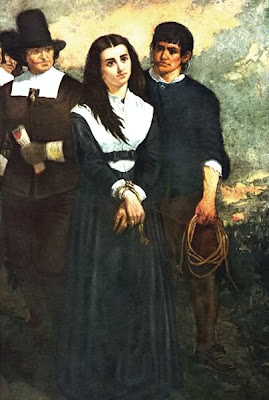 Bridget Bishop was born sometime between 1632 and 1637, and during her life, she married three times, but never had any children.  After her first two husbands died, she married Edward Bishop, a sawyer or wood cutter.

During the Salem witch trials, she received the most accusations.  The accusations against her were exceptionally vehement and viciousos - not so much as it pertained to being a witch, but more because of her flagrant and body lifestyle and risky form of dress.  She liked to wear red and kept the rumours flying with tales of her numerous and public fights with her husbands, the wild parties in her home till the wee hours of the morning, her love of drink and her passion for the sinful game of shovel board.  To make matters worse, she, a mere woman, owned two highly successful taverns!

In the Puritan society in which she lived, her blatant disregard for propriety soon brought much unwanted attention to her.  Before long, her dubious character came under speculation because of her shameful conduct caused.  People blamed her for the troubles that arose in other families.  Further, her behaviour corrupted the youth of the down.  She was considered evil.  The charge of witchcraft was soon to follow.

For the times, Briget was a fashion diva.  Her dresses were considered scandalous and it contributed greatly to her conviction.  She usually wore a black cap or a black hat, and a gown with a red paragon bodice bordered and looped with different colors.  Not only did her form of dress incite rumours and spite, it was used as evidence against her in hertrial.  The town dyer gave evidence that she brought him "sundry pieces of lace" outside of the wardrobe of a plain and honest woman.  his dye house "sundry pieces of lace" of shapes and dimensions entirely outside his conceptions of what would be needed in the wardrobe of a plain and honest woman.

After being cleared of witchcraft and being thrown in jail for publically andv violently quarelling with her husbands on previous occasions, another warrant was issued for her arrest on April 18, 1692.  To Bridget's shock, she had never before seen or met any of her accusers.  Her trial was complete with several girls who scremed out in pain caused by her witchcraft.  Here are some of the actual questions posed to her:

Q: Bishop, what do you say? You stand here charged with sundry acts of witchcraft by you done or committed upon the bodies of Mercy Lewis and Ann Putman and others.

Q: Goody Bishop, what contact have you made with the Devil?

A: I have made no contact with the Devil. I have never seen him before in my life.

Poor Bridget, even her sister's husband accused her of consorting with the devil.  With the entire town of Salem accusing her, any hope of successfully defeating the charges faded.  It took only 8 days to charge her, conduct a trial, and execute her.  On June 10, before a large crowd, she was transported to Gallows Hill and executed by the town sheriff.  In the seconds before her hanging, she displayed no remorse and continued to profess her innocence. 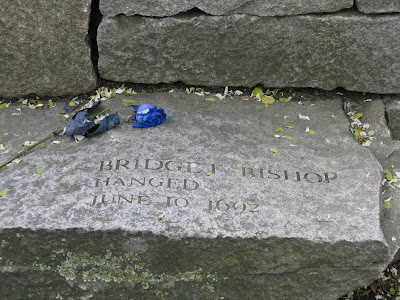 Numerous other so called witches were executed right after Briget.  Less than a year after her death, her husband married one of her accusers and several others confessed the Devil caused them to accuse her.
- Saturday, June 12, 2010

Such sad days...so much of my family lived in the towns right next to Salem at that time. I often think of how all of this affected them.

Thank-you for another look into the life of a fascinating woman!

Hope your weekend is wonderful, Mirella!

I love the story of Bridget Bishop. We were studying the Witch trials in my school and her name came up. I know almost all you can about her. The weird thing is my name is Bridget B. My last name is also the same number as hers. I guess that small link made me curious. I feel bad for all those people who had to die. And because of a bunch of ignorant girls no less.

As with most, if not all, of the accused during this time, it was all about power and vendettas and jealousy. Bishop owned 2 popular taverns. Bet you dollars to doughnuts her brother-in-law wanted to own them. In those days, the property of the accused and condemned were turned over the to local magistrates and sold. I am guessing those two pieces of property went for a song.

And if you look at a map of the time, you will see that all the accusers were on one side of the town, all the accused on the other side.

Those that were accused were owners of prosperous farms and lands and owned homes and property. Those on the accusing side wanted those things.

Also, the girls who first started the accusing were manipulated by their parents and guardians to accuse those with whom they had quarrels and vendettas against.