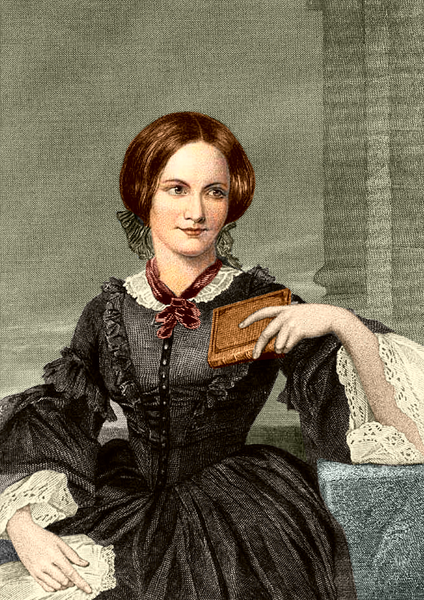 The human heart has hidden treasures,
In secret kept, in silence sealed;
The thoughts, the hopes, the dreams, the pleasures,
Whose charms were broken if revealed.

Charlotte Bronte
(1816 –1855)
Novelist and Poet.
Charlotte Bronte was the daughter of the Rev. Patrick Bronte. Along with her sisters, Emily and Anne, she was raised in a small parsonage in the Yorkshire village of Haworth. In her childhood, she lost her mother, and as the eldest, she assumed the role of caring for her sisters. Friends and family described her as, "the motherly friend and guardian of her younger sisters."

Their home overlooked the village graveyard. To escape from these surroundings which continually reminded the sisters of the loss of their our mother, the spent their free time creating stories of fantasy lands. These fantasy stories often involved their strict, religious aunt, Elisabeth Branwell. Later in a poem, Charlotte wrote:

"We wove a web in childhood, a web of sunny air."

After various efforts as schoolmistresses and governesses, Charlotte and her sisters began to write and soon published a volume of poems under the names of Currer, Ellis, and Acton Bell. Sadly, they sold poorly. This did not deter Charlotte and her sisters. Charlotte continued to write and she completed novels such as “The Professor” and “Jane Eyre”. Jane Eyre became an instant success and sold very well upon its release in 1854.

Charlotte married her father's curate, the Rev. A. Nicholls, but after a short though happy married life, Charlotte died in childbirth in 1855.

"Conventionality is not morality. Self-righteousness is not religion. To attack the first is not to assail the last. To pluck the mask from the face of the Pharisee is not to lift an impious hand to the Crown of Thorns. "

The human heart has hidden treasures,
In secret kept, in silence sealed;--
The thoughts, the hopes, the dreams, the pleasures,
Whose charms were broken if revealed.
And days may pass in gay confusion,
And nights in rosy riot fly,
While, lost in Fame's or Wealth's illusion,
The memory of the Past may die.
But there are hours of lonely musing,
Such as in evening silence come,
When, soft as birds their pinions closing,
The heart's best feelings gather home.
Then in our souls there seems to languish
A tender grief that is not woe;
And thoughts that once wrung groans of anguish
Now cause but some mild tears to flow.
And feelings, once as strong as passions,
Float softly back--a faded dream;
Our own sharp griefs and wild sensations,
The tale of others' sufferings seem.
Oh! when the heart is freshly bleeding,
How longs it for that time to be,
When, through the mist of years receding,
Its woes but live in reverie!
And it can dwell on moonlight glimmer,
On evening shade and loneliness;
And, while the sky grows dim and dimmer,
Feel no untold and strange distress--
Only a deeper impulse given
By lonely hour and darkened room,
To solemn thoughts that soar to heaven
Seeking a life and world to come.
- Friday, September 17, 2010

Thank-you for this! She's always been one of my favorite authors...so sad she died so young. Thank-you, as always, for all you share!


I hope you're doing well and having a wonderful day!

One of my favourite authors and I featured her on my Book Review Blog earlier this year, in honour of her Birthday.
http://lindyloumacbookreviews.blogspot.com/2010/04/charlotte-bronte.html

Jane Eyre was the first book that truly embrace my romantic teen heart. I remember eagerly reading the book and then watching every movie that was made of it. I actually liked George C. Scott in the role best.
Hugs and sparkles
WG

As a writer (or really any woman), reading about the lives of these three sisters is enough to make you weep.

I hope their work gave them joy.