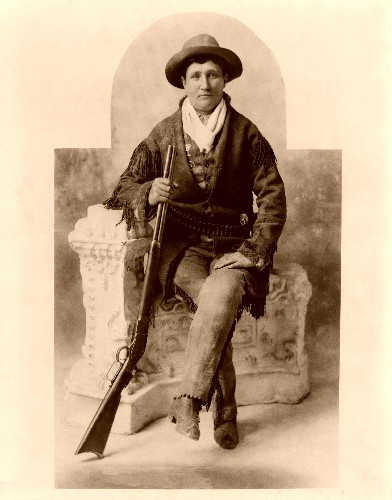 An Indian uprising separated her from her father and brothers, and at the age of 10 she was thrown into the world to make her own way alone. Although she had great friends and very positive opinions of the proper things that a girl could enjoy, she soon gained a local notariety for her daring horsemanship and skill as a rifle shot.

Most people thought of her as a hard drinking woman with a preference for men's clothing. She spoke and behaved bawdily, chewed tobacco and was handy with a gun. During her life she was an army scout, a bullwhacker, a nurse, a cook, a prostitute, a prospector, a gambler, a heavy drinker and one of the most foul-mouthed people in the West.

Before she turned twenty, General Cook appointed her as an army scout under Buffalo Bill. In June of 1876, she partnered with Wild Bill Hickok as an outrider for Colorado Charlie Utter's wagon train, galloping into Deadwood with a shipment of prostitutes, fresh from Cheyenne. 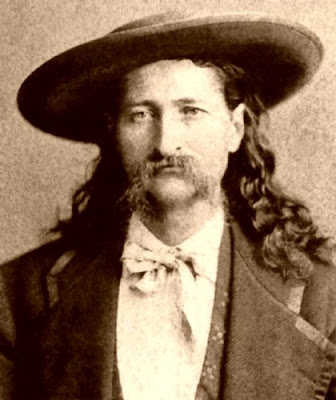 Wild Bill Hiciock
She had unlimited nerve and entered into the work with enthusiasm, doing good service on a number of occasions. Though she never did a man's share of the heavy work, she went places where old frontiersmen were unwilling to to themselves. Her courage and good-fellowship made her popular with every man in the command.

She earned her nickname in 1872 in a peculiar way. Back then, she was at Goose Creek Camp, S.D., where Captain Egan and a small body of men were stationed. The Indians were giving a lot of trouble, and there was much fighting.

One day Captain Egan was surrounded by a large band. They were fighting desperately for their lives, but were being steadily, but surely slaughtered. Captain Egan was wounded and had fallen off his horse.

In the midst of the fighting,she rode into the very center of the trouble, dismounted, lifted the captain in front of her on her saddle, and dashed out. They got through untouched, but every other man in the gallant company was slaughtered.

When he recovered, Captain Egan laughingly spoke of her as 'Calamity Jane,' and the name has clung to her ever since.

In 1876, by a daring feat, she saved the lives of six passengers on a stage coach traveling from Deadwood to Wild Birch, in the Black hills country. The stage was surrounded by Indians, and the driver, Jack McCall, was wounded by an arrow. Although the other six passengers were men, not one of them had nerve enough to take the reins. Seeing the situation, she mounted the driver's seat without a moment's hesitation and brought the stage safely and in good time to Wild Birch.

The citizens of Deadwood dubbed her the "White Devil of the Yellowstone" and "Saint" because she helped nurse the sick during a smallpox plague.

For the remainder of her days, Calamity Jane claimed to have been Hickock’s lover. But the record shows that Wild Bill had just recently married and his letters home from Deadwood indicate that he was happily wedded. Calamity Jane requested to be buried next to Wild Bill Hickock at Deadwood, South Dakota when she died, and there she rests to this very today.
- Friday, September 24, 2010

OMG! This is beyond a cool coicidence. I was just in Deadwood yesterday (we went to SD for vacation) and I visited her gravesite. Want a picture? She is indeed buried right next to Wild Bill. What a woman!

I am so glad Tara sent the pictures, it really completed the tale. I always enjoyed Jane's story but knew there was more to it. You always make it so interesting. Thank you for sharing - WG

Was named for Calamity Jane by an uncle who thought she was "quite interesting." In my early 20s Life Magazine had an issue of 100 famous American women, I called my mother saying, "Guess what Calamity Jane's real name is? ..." Seems everyone thought someone else had told me the story, otherwise, how would you explain the fact that I had horses, shot pistols, and had nicknamed my brother Wild Bill?! Weird & true. Martha Jane

Her mother Charlotte died along the way in Black Foot, Montana, in 1866 of "washtub pneumonia. So Martha Jane would have been 14.
Her father died a year later in 1867 when she was 15.

According to an article in infobarrel 'Calamity' was a Victorian euphemism for gonorrhoea.
"The unfortunate truth is Calamity Jane had been branded as diseased, plainly and simply. There were no heroics involved in her getting
the “calamity”, just a young woman’s unfortunate need to earn a living in a hard land.Certainly, any deflection from the truth would be easier
to live with than being known as a carrier of gonorrhoea."
http://www.infobarrel.com/Wild_Western_Women_Calamity_Jane

How fascinating, Selam. I didn't know that about her. Thanks so much for taking the time to comment and share this fabulous piece of info with us.