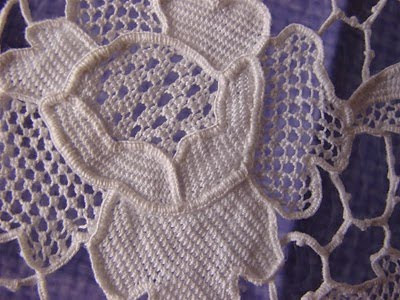 "Puncetto lace” is traditionally from the Valsesia area, a mountain valley in northern Italy.

Its exact origins are not known, but it is believed the lace came about as a result of the invasion of Saracens in the 10th century because it closely resembles the delicate filigree decorative patterns of Arab art from that time.

The first known example of puncetto lace dates from the 16th century when a man named Gaudenzio Ferrari, a very famous and reknowned artist from Valsesia adorned a statue of the Virgin Mary with this lace.

Years later, artists working in the Varallo Sacred Mountain Chapel painted examples of this lace to embellish the plain costumes the figures appearing in the popular every day life scenes they were creating. 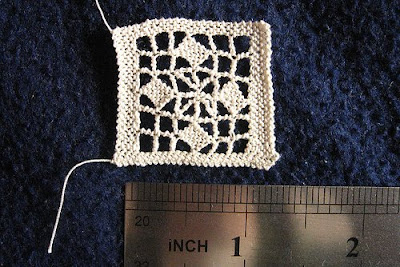 The popularity of the lace reached its height during the XIXth century, when Queen Margaret of Savoy, an admirer of Valsesia district, introduced it at her court, among her ladies-in-waiting.  The lace soon spread to France and Great Britain.

Centuries later, puncetto remained well known only in Valsesia Valley.  Women continued to make the lace to decorate their clothing or mothers made it to refine their daughter's trousseaus.

Most recently, puncetto is enjoying a re-emergence in part due to the interest of local public institutions and of many other people fond of this lace who are keeping this 450 year old art alive.

Such intricate work. Imagine having do this by candlelight and no eyeglass to help. xx

That is so cool! Such a lost art!! Great blog!

I have some beautiful old lace but no idea where it is from ,this was very interesting.