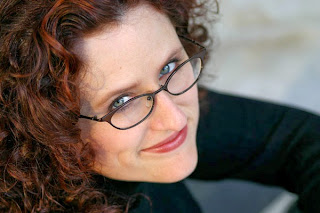 Please tell readers about yourself and your background.

I'm interested in the intersection of the spiritual and secular, the supernatural and the everyday, the past and the present. I'm fascinated by people's relationship with religion, the psychological interaction between people in all types of relationships, and by the miraculous and the frightening (often the same thing).

My education focused on English, history, and art history, but my day job for the last 15 years has been in marketing and communications. I'm a Patrick O'Brian and Doctor Who fangirl who is forbidden to sing anywhere but in the privacy of my own car (trust me…). My predominant vice is, sadly, cussing like a sailor.

The Pilgrim Glass is your most recent release. Please tell us about the story.

The Pilgrim Glass is a blend of history and mystery, a psychological and spiritual journey, slipping between modern and 12th century Burgundy.

Jonas Flycatcher, a well-respected but prickly artisan is contracted to repair a stained glass found deep in the ancient altar of the cathedral of Mary Magdalene at Vézelay. Traveling from California to Burgundy for the project, he meets Abbot Dubay, a worldly priest with a painful secret.

Jonas begins the laborious work of restoring the stained glass offering, but when he meets Meredith, an ex-pat photographer who seems to be channeling a 12th century pilgrim, his carefully constructed world – and the ancient glass – are threatened.

What did you have to learn about stained glass technique to aid the authenticity of this story?

I needed to learn the basics in terms of how stained glass is made now, how it was made in the past, and the process of creating hand-blown glass. I tried to include the tools of the trade without getting too heavily into the details, so the focus would be on the story.

Do you have a favorite character in the story?

I love all of them, of course, in different ways for different reasons; they're a bit like children in that way. That said, I have a huge soft spot for Abbot Dubay. He wasn't in the outline, wasn't even on my radar when I started writing the story, and emerged to be such a crucial part of the story. He's so urbane and complex - he's really delightful, if I say so myself. I'd love to meet him in real life.

I love that part of the creative process - having enough flexibility to allow new characters and new directions to emerge that you hadn't planned. That's magic to me, and part of the draw of writing in the first place.

How do you develop your plots and characters?

It really depends on what I'm working on. In terms of plot, The Pilgrim Glass came from my experience visiting the great cathedral at Vézelay; a historical I'm working on now grew out of family stories and lore; a novella was inspired by my fascination with the Black Plague; and one of my short stories was sparked by learning about the discovery of the jet stream. Once I've got the idea, I'll start with a general outline and modify as I go along.

Characters initially develop themselves, are sometimes blended with people I've met and experiences I've had, and then morph into beings I'd not necessarily planned or expected. To flesh them out, I'll use some tried-and-true tools, like stream-of-consciousness writing and character sheets.

Why did you choose to publish independently? What valuable lessons have you learned in the process?

I finished writing The Pilgrim Glass in early 2004 and began the process of looking for an agent. The book generated a lot of interest, but most passed because they simply weren't sure how to market it. After the manuscript was short-listed for finalists in the 2005 Faulkner-Wisdom competition and a semi-finalist in the 2009 Amazon Breakthrough Novel Awards, I knew it was time to go the independent route, and I published The Pilgrim Glass in December 2010. The process was a bit time-intensive, and required a great deal of attention to detail, but was relatively straightforward.

The most important thing I learned was to trust my instincts – about timing, about design, about the story. It's both scary and exhilarating to go it alone, and totally worth it.

What advice would you give to other debut writers?

I suppose I'd simply say trust yourself and believe in your story; it is an expression of your uniqueness in this world.

What’s next for you?

I hope readers enjoy the characters and story of The Pilgrim Glass as much as I enjoyed writing them! And, I hope the story inspires people to take a trip to Vézelay, or learn more about the 12th century, or perhaps even think about how their lives are like stained glass: uneven, imperfect, colorful, and unbelievably precious.

Thanks for your time, Julie, and best of luck with The Pilgrim Glass.

There's still time to win a free, signed copy of this wonderful book. Leave a comment on our review of The Pilgrim Glass to enter.