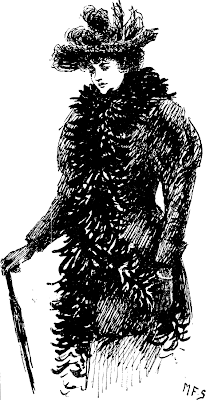 My name is Elizabeth Martha Brown (nee Clark). We all carry regret, but my biggest regret is having married John Brown, my second husband, a man several years my junior. I believe he married me first for my money and second for my good looks. Our marriage was unsettled and stormy from the start. Not long after we were married, my darling husband John took up an affair with Mary Davis, a younger woman trapped in a miserable marriage of her own.

One night, after preparing dinner, I sat in a chair and waited for John. I waited and waited and waited. Finally he came home at 2 a.m. very drunk. The minute he entered through the door, I accused him of being with Mary Davis. This set off his anger. He kicked the chair out from beneath me. Our battle raged for an hour at which time John struck me hard on the side of my head. This disoriented me and I sat down to recover.

He stared down at the dinner I had prepared for him. “Eat it yourself and be damned,” he said as he reached for a whip from the mantelpiece. He struck me with it several times. I screamed and threatened to cry out murder. He did not care and threatened to knock my brains through the window and hoped to find me dead. John then kicked me on my left side. The pain was tremendous. When he stooped down to remove his boots, my blind rage got the better of me. I seized a nearby hatchet which I had earlier used to break coal for the fire to keep his supper warm, and struck him several violent blows on the head. I cannot say how times I struck him. He fell at the first blow and never spoke or moved afterwards.

I was convicted of his death and was sent to Dorchester Prison in England. I was to be executed thirteen days later.

It rained on the day of my execution. As I left my cell, I shook hands with the chief warder and other officers. On my way to the scaffold, I remained calm and dignified even while those who attended me were overcome and weeping. I conversed briefly with the chaplain and prayed fervently with my hands clasped firmly together, my eyes turned toward Heaven. 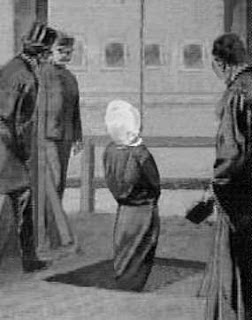 When I arrived at the scaffold, I walked courageously up the flight of eleven steps. Here I was restrained and my female attendants left me with the executioner. Among the crowd of nearly four thousand people, a sixteen year old man named Thomas Hardy watched. Little did I know that he was to immortalize my execution in the novel Tess of the d’Urbervilles one day. He stood close to the gallows and seemed ashamed to be there.

i wore a black, silk dress. The executioner placed a cloth over my head, but it began to rain and my face became visible beneath it. I managed to hold back my tears. The executioner, after pinioning me, left the platform to spring the track, but before he could do so, he had to return because he had forgotten to tie down my dress to prevent any scandalous fluttering. I remained stoic until the moment “justice” was done.
- Thursday, April 14, 2011

What a sad tale. I can't say I've heard of Elizabeth Brown's plight, but I might have to read "Tess" again. Her tale sounds like an unhappy marriage with cheating and spousal abuse. What a horrible situation. Perhaps there would have been a better way to deal with it, but who would not fight back when they are being beaten? I'm not quite sure "justice" was carried out.

I do believe there once was a limit to how thick a stick could be to beat your wife with. 'Domestic' violence wasn't interfered with by the law, so the only person seen to be guilty was Elizabeth, for murder. How sad.

Wow,my heart moved to my throat while reading this post. Though there is still a lot of domestic abuse, at least today woman have options. (If they are willing and brave enough to use them).

I'm doing a research paper on intimate partner homicides. The story tells me that domestic violence against women has been with us for centuries.To execute Elizabeth for defending herself is the true crime here. I'm going to read "Tess" during the summer.

I'm doing a research paper on intimate partner homicide, so this story caught my eye. Domestic violence of women have been around for thousands of years, but women are fight back by getting out of abusive relations through education of their options and support from the community. Besides the abuse, the real crime here was the execution of Elizabeth. I will pick up this book and read it this summer.