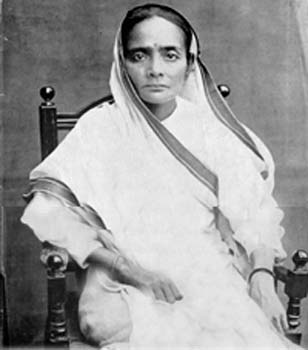 My name is Kasturba Gandhi and I was born in the year 1869, the daughter of a prominent business man. My childhood was uneventful and I was never taught to read or write. When I was thirteen years old, my family arranged a marriage for me to Mohandas Gandhi.

Soon, I bore a son named Harilal. Shortly thereafter, Gandhi departed for London to pursue his education, leaving me in India to raise my son. Between 1892 and 1900 I bore three more sons. I was very dedicated to religion and strongly abhorred the distinction of caste in my Indian society. We lived in an ashram during those early years. It was during this period that I began to support my husband in political protests and worked with at every opportunity. When Gandhi decided to improve working conditions for Indians in South Africa so they would have the power to represent themselves, I joined him in this endeavour and happily accompanied him to South Africa in 1897.
﻿ 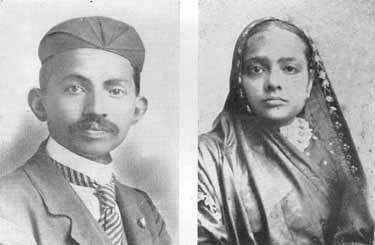 In 1904 I became actively involved in the Phoenix Settlement near Durban. It was during this time that Gandhi decided to practice Brahmacharya and he took the vow of chastity. I approved and also took the vow. We never shared sexual relations again.


In 1913, I protested against inhuman working conditions of Indians in South Africa. My efforts earned me a three month prison sentence for hard labour. Often, it was my husband who was arrested and when that happened, I always took his place, keeping a close eye upon struggles in India and encouraging women volunteers.

In 1915, I joined Ghandi in support of Indigo planters. There, I encountered many women and children whom I taught to read and write along with her important learnings like personal hygiene and discipline. In this way, I earned respect and the trust of the people I aided.


My self-determination and independent spirit caused many a marital argument. Once, when my husband asked me to contribute more to the running of our ashram and perform some menial tasks, I refused. He became so enraged he nearly threw me out of the home. In the end, I reluctantly agreed, but drew the line at cleaning toilets. That I would never do! We disagreed about the raising of our sons, too, especially because I felt Ghandi neglected them. But my husband firmly believed that his sons should not be entitled to any special privileges. It brought discord into her family, and Harilal, our first born, absented himself from our lives for many years because of it. 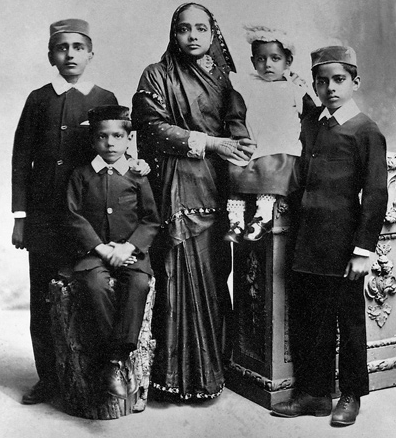 Kasturba and her sons

I suffered from chronic Bronchitis; a condition exacerbated during my term of imprisonment during the Quit India Movement. Upon my release, I joined my husband in detention at the Aga Khan's Palace in Poona. Ghandi could move his mind from one thing to another, but I was a brooder and could not separate myself from troubles and suffered from stress.

My health began to decline and the bronchitis progressed into pneumonia. The doctors wanted to prescribe penicillin, but Ghandi disagreed. In January 1944, I suffered two heart attacks and was confined to my bed, bearing the pain that refused to go away. Periods of breathlessness kept me from sleep. I asked for permission for an Ayurvedic doctor to see me. But this request was delayed until finally the government allowed a specialist in traditional Indian medicine to treat me. My health improved with the natural treatments and it pleased me that I was healthy enough to sit on the verandah in a wheel chair for brief spells.

But it was not to last and my illness worsened once more. The doctor could do no more for me. My spirits were never so low. I knew these were the final days of my life. One evening, my son, Devdas, took his father and the doctors aside, pleading fiercely that I be given penicillin to save my life. But the doctors told him my condition was fatal. When Ghandi learned that the penicillin had to be administered by injection every four to six hours, he tried to dissuade my son. He argued not to prolong my agony because I could not be cured, but said that he would not stand in the way if that was what my son wanted. In the end, it was decided to abandon the treatment.

My greatest joy during my illness was to see my son Harilal again. When he came to my bedside, I wept tears of joy. And then the end came. Embraced in the arms of my husband, my breathing stopped and forever left this world. 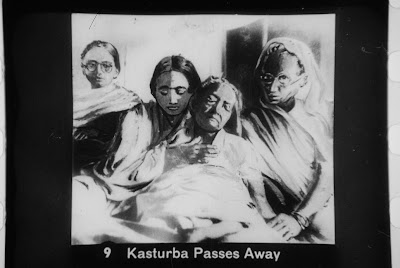 I just wanted you to know that I just awarded you the Irresistibly Sweet Blog Award. You can see all the details, and join in the fun here: http://spunstories.wordpress.com/2011/06/13/spun-stories-gets-noticed/

Have a great weekend!

Ohmygoodness, what a moving entry! Shamefully, I know so little about Gandhi, and I had no idea he was married or that his wife was such an activist herself!

We often talk about the women "behind" great men, but, like Kasturba, I think more often they stand alongside their men rather than behind them.

Anna at the Doll House said...

What an interesting blog.

I am our newsest follower.

Jeez, let her have the antibiotics!