TANGS FOR THE MEMORIES

She was one of the most extraordinary young women in Chinese and world history, but you probably never heard of her.


Her story could have come straight from a Walt Disney cartoon, The Little Mermaid in ancient China; there’s a good Dad, an evil villain and the struggle for Utopia. What it doesn’t have is a handsome prince and a happily ever after - at least not for our courageous princess.

Her name to history is Princess Pingyang.

She was one of eight daughters fathered by a man named Li Yuan, who had been born a peasant but had risen through the ranks to become a general in the army of the evil Emperor Yang. (No, I’m not making this up.)

Yang had taken the throne after having his father poisoned by hired assassins. No less than six million people then died working on his plans to extend the Great Wall and the Grand Canal - over ten per cent of the entire population. He was one of the most thoroughly unpleasant men in history; Donald Trump with attitude.

Yang then invaded Korea and Vietnam, snatching defeat from the jaws of victory despite overwhelming numerical superiority. He lost a million men in those campaigns and bankrupted the empire. Then, to prove the first time wasn’t a fluke, he did it a second time, this time with an army of slaves, conscripts and paroled prisoners.

Li Yuan was one of the few military commanders to have fought with honor and retained the respect of his men. So,  true to character, Yang sent him into exile .

With the Empire in shambles and the countryside ravaged by bandit gangs and warlord armies, Li decided to revolt. He sent for his daughter Zhao and her husband, Chai, who were unfortunately living inside Yang’s palace; Chai was commander of the Emperor's Palace Guard.

Zhao told her husband: you go, don’t worry about me. He said, oh all right then and took off. The young woman then somehow avoided Imperial assassins and roving bandit tribes and made it home to the family estates in Huxian.

Instead of feeling faint and lying on the lounger waiting for Daddy to return from exile to rescue her, she sold off her family's home and land and used the money to raise an army - which became known as the "Army of the Lady." 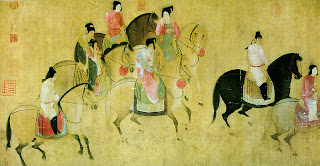 She was anything but ladylike. She approached local bandit leaders, and offered them commissions in her new army if they joined her; if that didn’t work, she bribed them. If any failed to be turned by her coy smiles and fluttering eyelashes she routed their army, executed them and seconded their troops.

She played rough but she had a good heart. She forbade raping and pillaging; instead she threw open her family’s rice stores and fed the starving population. This hearts and minds policy won her massive support and soon her army had swollen to a fighting force of over 70,000 warriors.

Yet still Emperor Yang did not take her army seriously - military genius that he was - because it was led by a woman, and one barely out of her teens, at that. 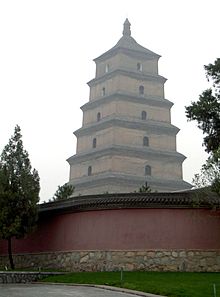 Late in 617, her father returned, crossing the Yellow River; so Pingyang joined him, setting up her own separate headquarters. She then joined the final assault on the Imperial palace at modern day Xi'an. General Li seized the throne and declared himself Emperor, becoming the first ruler of the Tang Dynasty.

It was a dynasty that was to last three centuries, and is now seen as the high point in Chinese Imperial civilization. China grew to become the largest and most powerful empire on Earth. Philosophy, trade and the arts flourished.

Up until that time, women were little more than slaves, required to obey their father before marriage, their husband during marriage, and their sons in widowhood. But over the next hundred and fifty years China underwent dramatic change. Women won the right to own land, to divorce and even to remarry.

A Tang Dynasty divorce agreement, unearthed from Dunhuang, reads: "Since we cannot live together harmoniously, we had better separate. I hope that after the divorce, niangzi (a form of address for one's wife) can be as young and beautiful as before, and may you find a more satisfactory husband. I hope that the divorce will not plant hatred between us in the future."

So Princess Pingyang not only won the throne for her father - she helped win emancipation for the sisters, too. Unfortunately she did not get the happy ending she also deserved. She died at just 23 years old, two years after her father assumed the throne.

Her father gave her a military burial fit for a general; when officials of the Ministry of Rites objected he said: "The Princess personally beat the drums and rose in righteous rebellion to help me establish the dynasty. How can she be treated as an ordinary woman?"

It was China's Renaissance. Lily feet, subservience and Mao Tse Tung were still to come. But for three centuries China and Chinese women prospered, thanks to one of the most extraordinary and courageous young women in history, riding at the head of the Army of the Lady.

Thank you for writing such a beautiful and easy to read post about this extraordinary woman, about whom I have never heard before. I have a blog about childless women and am constantly looking for inspiring women and history and my god, aren´t they many?

You blog is a favorite for a very long time, I just never wrote here before.

Keep up the good work!

I hope your visitors read slowly enough to enjoy your humor! I'm still smiling about the headline.

A fascinating post which I appreciate personally more I think having visited China. I am here catching up on all the posts I missed during my computer woes, so good to be back.