The Life and Times of the Inimitable Lola Montez


She was one of the most notorious women of the Victorian era. She was undressed by kings and saw some things that a woman ain’t supposed to see.

She even inspired a popular nineteenth century catchphrase: ‘Everything Lola wants, Lola gets!’ 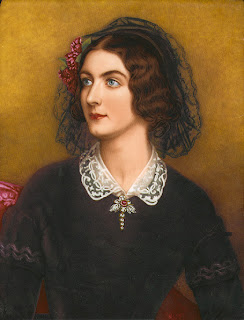 She could shoot, she could dance and she took a horse whip to anyone she didn’t like. She even brought down a German monarch.

And all before menopause.

She was born Eliza Gilbert, in County Sligo, Ireland in 1821. She went to boarding school in Scotland where she soon made an impression on her teachers who described her as an elegant and graceful child, with eyes of ‘excessive beauty’ and an ‘orientally dark’ complexion.

They also noted a violent temper and a stubborn streak.

At 16, Lola eloped with one Lieutenant Thomas James. They did not live happily ever after. Five years later Tom sued her for divorce, citing adultery. It was granted on the condition that neither party ever married again.

So barely in her twenties, she was already a woman with a past; an elopement, an adultery and a divorce meant that she could never hope for anything like a normal life in Victorian England. Her solution was as eccentric as it was unexpected. She took herself off to Spain to learn the flamenco. Eliza Gilbert, disgraced wife, re-invented herself as Lola Montez, exotic dancer. 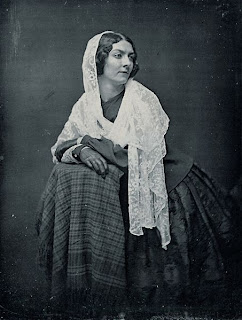 He was to be the first in a long line of Prince Charmings. Thanks to his patronage, she soon became a favorite in European court circles, performing for the Emperor of Russia and the King of Prussia among others.

It’s a pity that while taking flamenco classes, she didn’t also sign up for anger management 101. While in Berlin she horse-whipped a police officer who had the temerity to try and remove her from a royal parade field.

Things went from bad to Warsaw when she went to Poland, where her stage performance almost caused a riot. She was placed under house arrest and then threatened the policeman sent to guard her with a dagger. 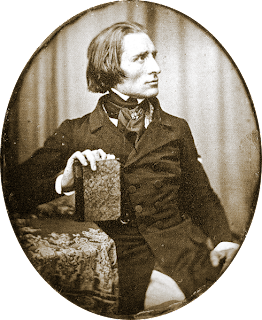 Undeterred, she embarked on a rhapsodic affair with Franz Liszt. Typically for someone with a quick temper, she lost her composer.

In 1844 it was on to Paris, and the next in her long line of lovers, newspaper editor Alexandre Henri Dujarier. After he died in a pistol duel, she took the arm of Alexandre Dumas Pere, author of 'The Three Musketeers.'

Two years later she headed for Bavaria, thinking to earn some spending money performing in the Munich Oktoberfest. But when the State Theatre told Lola her dancing might cause moral offence, she appealed the decision to King Ludwig of Bavaria himself. The King was far less concerned about offending public morals, as we shall soon see, and allowed her to debut in a play called, fittingly, 'The Enchanted Prince.'

Her next major role was as his mistress. 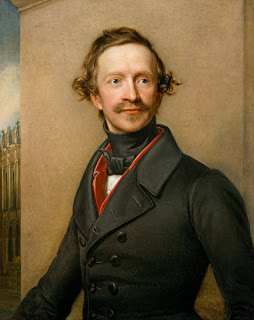 Ludwig built Lola a palace and named her the Countess of Landesfield. Some even called her the uncrowned queen.

But she was no Princess Diana; arrogant and haughty, Bavarians saw her as Princess Uncharming. Ludwig's relationship with her contributed in no small measure to his fall from grace. As hatred for Lola grew, Ludwig's entire cabinet resigned and after a revolution in 1848, the King also abdicated.
Lola returned to London.

Never one to mope, she married George Trafford Heald. a young army officer with a recent large inheritance.

But the marriage broke the conditions of her divorce, and Lola again had to flee Britain for France or face life behind bars. She and Heald ran up huge debts in Paris. Well, Lola did. George fled back to England.

She went to America, and in San Francisco she married Patrick Hull, a local newspaperman. But that marriage soon went out of circulation too. 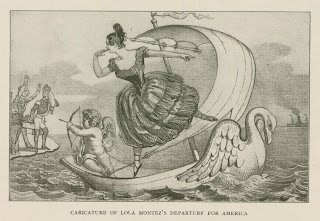 Next day the Argus thundered that her performance was 'utterly subversive to all ideas of public morality'. After reading another bad review in The Ballarat Times, she attacked the editor, Henry Seekamp, with a horse whip.

She ended her days in New York. On 30 June 1860, she suffered a stroke which left her partially paralyzed. By Christmas Day she had recovered enough to hobble outside for a breath of fresh air but the chill air gave her pneumonia and she died a month later.

And so ended the life of one of the nineteenth century’s most astonishing and enigmatic women. Defying the conventions of her age, Lola lived a riotous and passionate life utterly on her own terms.

She is buried in Green Wood Cemetery in Brooklyn beneath a tombstone inscribed Mrs Eliza Gilbert - a name she never used. As a final insult it gives her age as 42 - she was only 39.

Lucky for the engraver she wasn’t around to correct him. She would have taken the horsewhip to him.

What is also missing from her headstone is a suitable epitaph for such a remarkable woman. It might well have been.

Everything Lola wants - Lola gets.

And as you say - all before the menopause! Very amusing post - I loved the word play.

Thanks Frances, thanks Audra. As you say - what a woman! She appears in a very interesting cameo in one of George MacDonald Fraser's Flashman books, which is where I first came across her years ago. A lady well ahead of her time!