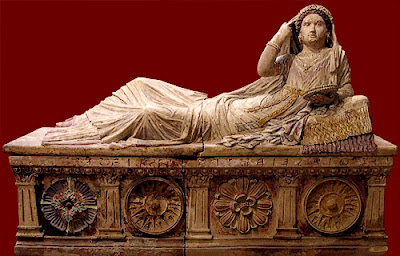 If there were a prize for getting unfairly bad-mouthed in ancient history, Etruscan women would likely win hands down. The Greeks and later Romans said terrible things about them: lascivious, lewd, sybaritic, totally out of control. Imagine! Etruscan women “attended banquets” where they “sat under the same blankets as their husbands!” – a behavior that had them compared to hetairai (basically courtesans or prostitutes: the only women allowed at Greek parties). Even Aristotle tut-tutted.
Not only did Etruscan wives scandalously go out in public -- and entertain lavishly, wear glorious jewellery, indulge a clothing sense that is recorded in frescos, statuary, and the bronze mirrors etched with sometimes rather racy scenes that give us fascinating detail of how fashion changed down the centuries – but they also learned to read and write. (We know the danger of that!) They were rumored to raise their own children, too. Presumably passing along the dire literary habit.

Before the rise of Rome as a super power, the Etruscans ruled almost the whole of Italy. Their ships dominated the surrounding seas. Fearsome enough, as news of them spread abroad, without the added queasiness of hearing how Etruscan society accorded women influence and power.

Hard to say where this all started. With Tanaquil? Who used her soothsaying powers to persuade her Etruscan husband, Lucius Tarquin, that he could become the first Etruscan king of Rome?

Or maybe the bad rap began with Tullia, her successor, who arranged a series of murders to keep the dynasty in the family -- finally convincing her husband that her own father should be murdered, then publicly driving her chariot over his body to make sure. This ruthless streak was passed along to the third of the Tarquin kings, Tarquin the Proud, whose son finally brought down the dynasty with the infamous “rape of Lucretia”. After that, the Etruscan Tarquins were driven from Rome, and a Republic was established.

Granted, the Tarquins turned out to be an overbearing lot (though responsible for any number of remarkable advancements in the Rome). But surely it’s unfair for the whole of Etruscan womanhood to be tainted by their extremes.

One of the reasons that the Etruscans, in general, gained a reputation for libertine excesses is that none of their literature survives. Their enemies got the last word in, literally. At least, until archaeology came along to tell a different story.

We know, now, that women in Etruria were accorded dignity and respect, right across the spectrum of family and public and religious life. And speaking of those children, whom so scandalously they “raised”, there are many statues, carvings and ex-votos, large and small, showing images of women not just raising, but breast-feeding their children – images so like Medieval and Renaissance depictions of “Madonna and Child” that it’s hard not to wonder at their influence on the great masterpieces of later Italian religious art.

So yes, they loved to party – but even in lavish “elite” tombs, their favorite things to take along to the after life included loom weights, spindle-whorls, and much further evidence of dedication to the home based industries that made such a major contribution to their society’s commercial wealth.

Still, they were scandalous, these Etruscan women. They rode horses (shockingly, “astride”, as recent analysis of a female skeleton has affirmed); some even had their own chariots (discovered buried with them in their graves); and unlike Roman women who had no names of their own (but were known just as their fathers’ daughters or their husbands’ wives) Etruscan women passed on both name and rank to their children, along with distinct legal rights. Not only did they own their names, but they had a distinct  sense of ownership of their bodies – as excavation of Etruscan “healing sanctuaries” has revealed, where miniature bronze or terracotta reproductions of the most intimate female body parts have been discovered, along with other votive offerings.

No wonder they were tut-tutted at. What a threat they truly must have seemed, to other “decently ordered” cultures of the ancient world. Across society at large, their like was not seen again till modern times.

But that is another story.