Her mother is remembered by history as a modest and heroic woman.

She was born at a Roman outpost on the Rhine, near present day Cologne. When she was 13 she married her second cousin Domitius who, although wealthy, was - according to Suetonius - “a man who was in every aspect of his life, detestable"

When she was 21 the emperor Tiberius died and her only surviving brother, Caligula, became the new emperor. A man who was, in every aspect of his life, degenerate.

Nevertheless, Agrippina’s star began to rise. Caligula loved his sisters very much; too much. Today he might plea bargain 2-5 years too much. 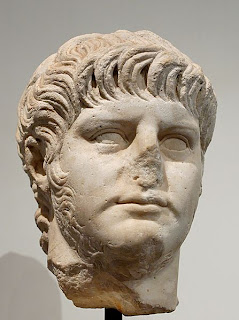 That same year she gave birth to a boy - Lucius Domitius Ahenobarbus, better known to the world today as Nero.

When her husband was congratulated by friends on Nero’s birth, he supposedly replied: "I don't think anything produced by me and Agrippina could possibly be good for the state or the people."
Portentous words.

When Agrippina's sister, Drusilla, died of fever, Caligula went insane. She was the sister he loved too much most of all. The party was over: Agrippina and her other sister, Livilla, turned on him. They were involved in the Plot of the Three Daggers, a failed attempt to murder Caligula and install Lepidus as the new Emperor.

Instead, Lepidus was executed and the two sisters had to sell their slaves and (gasp!) jewellery and were exiled.

When Caligula was finally murdered, Agrippina’s uncle, Claudius, became the new Roman Emperor. Her husband conveniently died and Agrippina returned to Rome, still hungry for the game. She put the moves on an up and coming general called Galba (he later became emperor) but he was a happily married man and told her so. His mother-in-law then gave Agrippina a good slapping in public.

A minor setback. Agrippina’s brother-in-law then divorced her dead husband’s sister  so he could marry her. Yes, really. He was very rich and well connected. 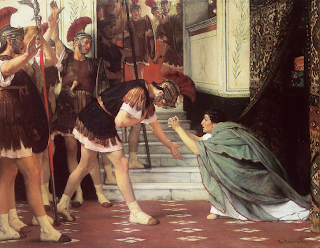 Two wealthy husbands, both dead; Agrippina was doing very well indeed. Then the empress Messalina was executed for trying to poison Claudius (the leading divorce lawyers in those days was a firm called Hemlock, Henbane and Nightshade.)

Incredibly, Claudius considered remarrying for a fourth time. Agrippina climbed onto uncle’s lap, incest being a family tradition, so to speak. She persuaded him to marry her.

Even the Romans considered this immoral.

But this did not deter Agrippina. She consolidated her hold on power by having Caligula’s other ex-wife, Lollia, convicted for sorcery. After her suicide she became the most powerful woman in Rome.

She manipulated Claudius into adopting her son, making Nero his successor and depriving his real son, Britannicus, of his heritage. She then married Nero to Claudius’s daughter, Octavia, his step-sister.

There are families in the Ozarks who would frown at this behaviour.

When Claudius tried to renege on this arrangement Agrippina is said to have divorced him with a plate of poisonous mushrooms. She then became a priestess of the cult that deified him after his death.

Nero became the next emperor and she hoped he would be her puppet. But now he had everything he didn't want her interfering anymore so she decided to switch her allegiance back to Britannicus.

Nero had him poisoned at a banquet. For the next 3 years no one in Rome ate anything. Agrippina was forced out of the palace. Nero even took away her bodyguards.

But now he wanted her out of the picture completely. Three times he tried to poison her but each time she had the antidote on hand. So Nero settled on an idea so ingenious it would make even the CIA wince. He rigged his mother’s bed so that when she laid on it a mechanism collapsed the ceiling. Nice idea - but Agrippina had a slave warm her bed for her every night; the poor woman died - working flat out, as it were.

Well before the Titanic, Nero then invented the self sinking boat. He invited her onboard to celebrate the feast of Minerva, and dropped the upper deck on her, but a sofa broke the fall. Nero then ordered the crew to scuttle the ship.

After the sinking, one of Agrippina’s friend shouted out to a rescue boat that she was Agrippina, thinking they would come and save her. Instead they bludgeoned her to death with their oars.
Agrippina meanwhile safely reached the shore.

Losing all patience Nero gave up on dirty tricks and sent three men to stab her at home. Her reputed last words were: Stab me in the womb first, a not too oblique reference to the son who sent her assassins.

If she wanted to prick his conscience, it worked. Having finally murdered his mother, Nero was spooked. He had his mother’s death on his conscience the rest of his life. He suffered recurring nightmares, and saw her ghost so often he hired Persian magicians to scare her away.

Agrippina was a formidable woman. During her life she boasted an impressive list of lovers, including her brother, her brother-in-law, her son’s tutor, her uncle, and according to Suetonius, her son as well.

She once visited astrologers to ask about her son’s future. They told her that he would one day become emperor and kill her. She replied, "Let him kill me, provided he becomes emperor.’

She got her wish. 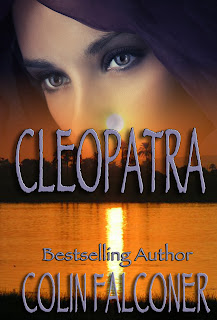 Colin Falconer is the author of the internationally bestselling CLEOPATRA, DAUGHTER OF THE NILE and over twenty other novels.

If it wasn't all true, you'd think of it as a Roman soapie. A lot of the way we think of this story is based on I, Claudius, and THAT was inspired by Suetonius, the gossip columnist of Ancient Rome. Mind you, there's an immediacy about what Suetonius writes, because now and then he will stop and say, "My father met Emperor Otho and he said..." and "I remember when I was a child Domitian had a ninety year old man stripped in court..." and you feel there's a connection between you and Suetonius.

Aggrippina sounds like a scary lady! You fatten wonder how her mother and Germanicus, both decent people, somehow raised such a dreadful brood!