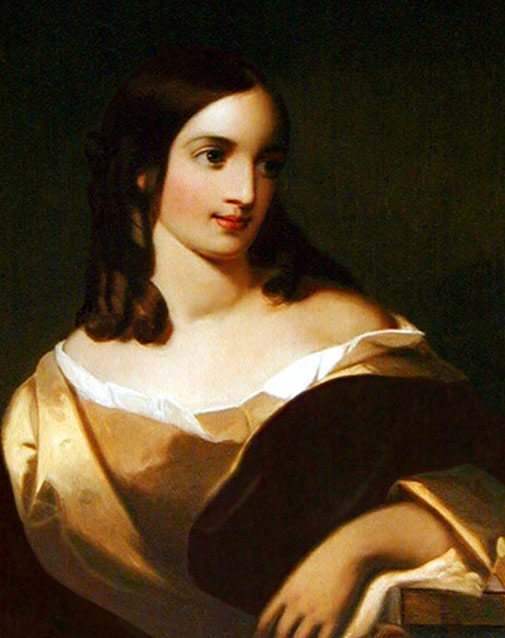 Virginia Eliza Clemm was seven years old when she met her future husband, her cousin, Edgar Allan Poe. At the time, Edgar had been discharged from the army and came to live with the poor family. Little Virginia acted as a messenger between him and a young woman in the neighborhood he had become smitten with. Edgar developed a softness of heart for his devoted little cousin.

Edgar left the family to take a job in Baltimore. While there, poor Virginia’s siblings died and she was left alone with her destitute parents. Protective over his devoted little cousin, Edgar decided to marry her, but she was far too young. Neilson Poe, the husband of Virginia’s half-sister, Josephine Clemm, and newspaper magnate heard about Edgar’s interest in marrying the very young Virginia and intervened by offering to take her in and educate her. This angered Poe who saw it as a blatant attempt by his bitterest enemy to keep him and Virginia apart. So he took pen, a mighty weapon in the hands of such a talented writer, and wrote a heartfelt, emotional letter to Virginia’s mother and father pleading that they allow Virginia to make her own decision. In his letter he offered to take care of them all if they moved to Richmond.

They agreed and Poe married Virginia in 1836. Edgar was 27 and Virginia was 13. They honeymooned in Petersburg, Virginia. Needless to say, this marriage between first cousins raised more than an eyebrow. Many believed the couple never consummated the marriage, while others surmised Edgar waited until his bride was 16 before bedding her. Nevertheless, but by all accounts, Edgar and Virginia were a very happy, devoted couple. That is, despite his ever increasing dependence on alcohol and stimulants. On one Valentine’s day, Virginia wrote a love poem to her beloved husband:

Ever with thee I wish to roam —
Dearest my life is thine.
Give me a cottage for my home
And a rich old cypress vine,
Removed from the world with its sin and care
And the tattling of many tongues.
Love alone shall guide us when we are there —
Love shall heal my weakened lungs;
And Oh, the tranquil hours we'll spend,
Never wishing that others may see!
Perfect ease we'll enjoy, without thinking to lend
Ourselves to the world and its glee —
Ever peaceful and blissful we'll be 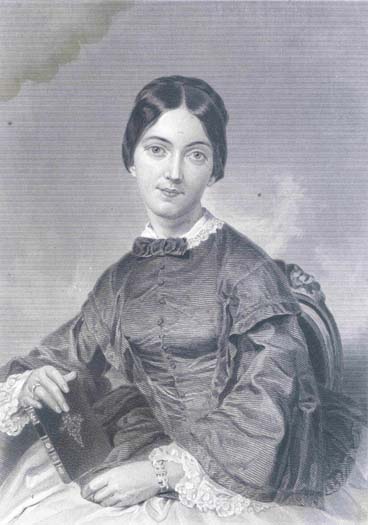 Soon, however, scandal touched their lives. Edgar began to flirt with a young married woman and poetess named Frances Sargent Osgood. Aware of the relationship, Virginia reluctantly encouraged it, often inviting Frances to her home because the woman’s presence seemed to curtail Edgar’s drinking. So everything was tolerable for a while. After all, Virginia knew it was best to keep one’s enemies close. This way she could keep a close on the relationship. 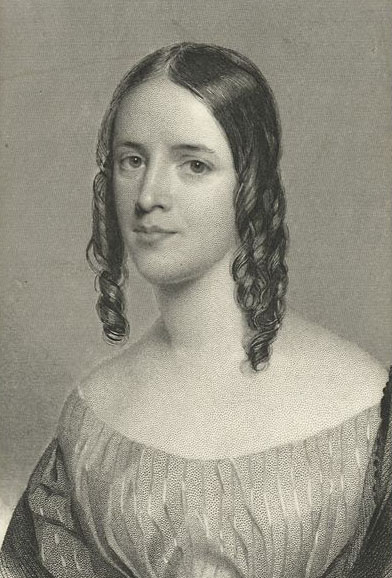 Enter Elizabeth Fries Lummis Ellet, another writer and poet. She became infatuated with Poe and jealous of Frances. But Edgar had no interest in Elizabeth. He found her love for him loathsome and did all that he could to repel it with scorn. He printed many of her poems to him in a journal of which he edited.

One day, while visiting Poe, Virginia showed the meddling, spiteful Ellet one of Osgood's personal letters to Poe and pointed out some questionable paragraphs. Jealous of Osgood, Ellet took matters into her own hands and contacted her nemesis. She strongly warned the woman to beware of her indiscretions and asked that her own letters be returned by Poe. Osgood did what she could to appease the vengeful Ellet and sent two women to ask Poe for the letters. Angered by their interference, Poe called the women busy-bodies and told them that Ellet had better look after her own letters. He then gathered up all Ellet’s letters and dumped them at her house.

But even with her letters returned to her, still bent on revenge, Ellet asked her brother, Colonel Willaim Lummis, to intervene. Lummis, did not believe that Poe had already returned the letters and threatened to kill him. Hearing this, Poe requested a pistol from his friend Thomas English so he could protect himself. But even English didn’t believe Poe had returned the letters and questioned their existence. Angered at being called a liar, Poe and his friend came to blows. The fight only sparked more gossip over his affair with Osgood.

Unfortunately things didn’t end there. Osgood's husband threatened to sue Ellet unless she formally apologized for her insinuations. This she did, in writing, citing that the letter Virginia had shown her must have been a forgery by Poe because he was intemperate and prone to lunacy. Poe’s enemies were only too eager to put this into print, saying Poe was deranged and insane.

All this deeply affected poor Virginia and she soon began to receive letters about her husband’s affair and indiscretions. She strongly believed the letters were coming from Ellet.
Virginia developed consumption, also known as tuberculosis and her health declined. Soon, she became bedridden. His wife’s illness made Poe depressed. He even wrote that her illness made him insane between “long intervals of horrible sanity.” Virginia’s illness and Poe’s depression drove them into destitution. He sought solace in alcohol. After her death, Poe went into a tailspin. The loss of his wife was more than he could bear. He did not care about anything anymore. Alcohol continued to numb his pain. He regularly visited Virginia's grave, in the dead of night, in the cold snow. His relationship with Osgood had ended when she returned to her husband, but Frances believed that Virginia was the only woman Poe truly loved.


THE RAVEN
BY
EDGAR ALLAN POE 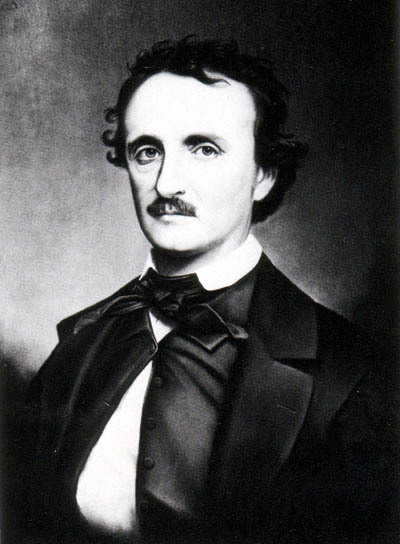 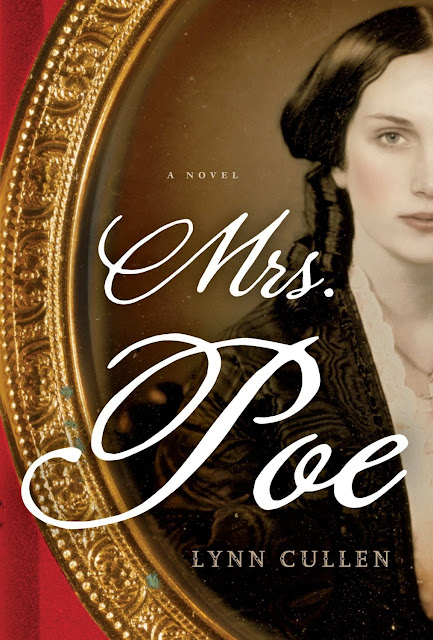 A writer and his demons. A woman and her desires. A wife and her revenge

1845: New York City is a sprawling warren of gaslit streets and crowded avenues, bustling with new immigrants and old money, optimism and opportunity, poverty and crime. Edgar Allan Poe’s “The Raven” is all the rage—the success of which a struggling poet like Frances Osgood can only dream. As a mother trying to support two young children after her husband’s cruel betrayal, Frances jumps at the chance to meet the illustrious Mr. Poe at a small literary gathering, if only to help her fledgling career. Although not a great fan of Poe’s writing, she is nonetheless overwhelmed by his magnetic presence— and the surprising revelation that he admires her work.

What follows is a flirtation, then a seduction, then an illicit affair . . . and with each clandestine encounter, Frances finds herself falling slowly and inexorably under the spell of her mysterious, complicated lover. But when Edgar’s frail wife Virginia insists on befriending Frances as well, the relationship becomes as dark and twisted as one of Poe’s tales. And like those gothic heroines whose fates are forever sealed, Frances begins to fear that deceiving Mrs. Poe may be as impossible as cheating death itself. . . .

Mrs. Poe by Lynn Cullen is a beautifully rendered story about the two women, Virginia Clemm (wife) and Frances Osgood (mistress) who each deeply influenced Edgar Allan Poe's life. In this biographical historical fiction novel, the author paints a story of deep passionate love, betrayal, duty, and jealousy. Although the novel is entitled Mrs. Poe, I found the stronger focus on Frances rather than Virginia in the story. Both women were well characterized: Virigina weak and sickly, but staunch in her love for her husband, even to the point of bitter jealousy, and Frances who walked a fine line between her broken marriage, the tensely awkward friendship with Virginia, and her passion for Edgar Allan Poe. I liked the women's vastly different personalities - it really added interest throughout the story.

What fascinated me was that the author, whether intentional or not, managed to capture the dark side of all the characters, just like Poe himself did in all his writings. Coupled with lyrical prose and a fascinatingly complicated love triangle, the book held my attention from start to finish, giving me an insight into the tumultuous life of not only the characters, but of writers and the struggles they faced. This is an excellent novel, albeit perhaps with the author's strong personal interpretation of the facts. An excellent book for those that love biographical novels about women set in Victorian times. Definitely recommended.
- Tuesday, October 01, 2013

I just finished this novel. I think the intention behind the title is referenced early in the book when it mentions that Osgood is called "Mrs. Poe" as she is a popular female poet during the same time period as Edgar is being noticed for The Raven.

I agree with your comments on the book. Very well written and capturing my attention from beginning to end. It has left me digging to find which parts of it are fiction and which are fact.