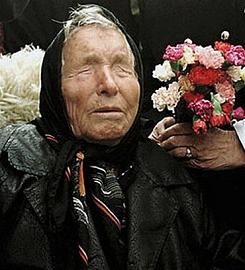 Dubbed the female Nostrodamus, Baba Vanga has seen the future and foretold the fates that will befall the world. Many have already happened. Many more chilling, fascinating are awaiting fruition.

This humble woman was born in Macedonia. She was a premature baby who suffered with numerous health issues. When she was a young girl, her mother died while her father was fighting for the Bulgarian army during World War II.

Mostly raised by a neighbor, she loved playing games about healing and from there her passion was born.

Vanga managed to cheat death several times. One day, a tornado struck and poor Vanga was seized by the turbulent winds and hurled into a field. When she was found, she was in extreme pain. Her eyes were covered in dirt and dust and she could not open them. Attempts to heal her failed and Vanda became blind. In 1939 she caught pleurisy and everyone was certain she would die. Instead, she healed very quickly.

Despite the fact she was blind, Vanga could see into the future and her predictions were more often then not, highly accurate. Word spread of her ability and many came to see her seeking answers for missing relatives in the aftermath of World War II. Before long, her predications became famous, as did she.

Vanga even dreamed of her own death. She predicted she would die on August 11, 1996 and would be buried two days later. And this in fact came true. She died of breast cancer and was buried on the exact dates she predicted. Humble and poor all her life, great dignitaries and large crowds attended her funeral.

Like those of Nostrodamus, her predictions have been recorded.

Here are some of her predictions that have come true already:

In the 1950's, she foresaw global warming and the 2004 Tsunami.
“Cold regions will become warm … and volcanoes will awaken. A huge wave will cover a big coast covered with people and towns, and everything will disappear beneath the water.”
“Everything will melt, just like ice.”
In 1989 she predicted the September 11, 2001 terrorist attack on New York’s Twin Towers:  "Horror, horror! The American brethren (twin towers)will fall after being attacked by the steel birds (hijacked passenger planes). The wolves will be howling in a bush (US president George Bush) and innocent blood will gush.”
In 1980 she predicted the sinking of Russian nuclear submarine the Kursk in 2000. She saw the crew die horrible deaths over several days while international rescue crews tried in vain to retrieve the vessel from the depths of the ocean. Until the tragedy, people assumed the “Kursk” Vanga referred to was the Russian city the Kursk was named for. Her exact predication was: "At the turn of the century, in August of 1999 or 2000, Kursk will be covered with water, and the whole world will be weeping over it.”
Vanga predicated the election of Barack Obama, stating that the 44th president of the United States would be African American, but she also warned that he would be the “last US president”. Only time will tell what that truly means.

Here is a more complete list of the many predictions to come. Chilling, fascinating, and truly amazing!

2010 – World War III. War will begin in November 2010 and end in October 2014. Will begin as usual, then nuclear will be used initially, and then chemical weapons.
2011 – As a result of the fallout of nuclear fallout in the northern hemisphere, there will not be any animals or vegetation. Then Muslims will wage war against chemical surviving Europeans.
2014 – Most people will suffer skin cancer and other skin diseases (a consequence of chemical warfare).
2016 –Muslims” will invade Europe, which will “cease to exist” as we know it. The ensuing campaign of destruction will last years, driving out populations and leaving the entire continent “almost empty”. Europe almost lonely (empty).


2018 – New China becomes a world power. Developing countries in turn will be operated from exploiters.
2023 – A little bit of change in the Earth’s orbit.
2025 – The population of Europe will reach almost zero. Europe still little settled.
2028 – A new energy source will be created (probably a controlled thermonuclear reaction). Hunger is gradually being overcome. A manned spacecraft is successfully launched to Venus in order to find new energy sources.
2033 – The polar ice are melting. World water levels will rise as the polar ice caps melt (this is already happening).
2043 – The world economy is thriving. In Europe, Muslims rule. Europe’s transformation into an Islamic caliphate is complete. Rome is named the capital. The world’s economy thrives under Muslim rule.
2046 – Bodies (organs) can be manufactured (cloning?). Replacing the bodies is becoming one of the best methods of treatment.
2066 – During the attack on the Muslim Rome, the United States used a new kind of weapon – the climate. The sharp cooling (instant freezing). America will use a new climate change weapon for the first time in a bid to retake Rome and bring back Christianity.
2076 – Classless Society - Communism will return to Europe and the rest of the world.
2084 – The restoration of nature. It will be reborn
2088 – A new disease – aging for a few seconds!
2097 – The rapid aging defeated.
2100 – Artificial sun illuminates the dark side of the Earth. Man-made sun illuminates the dark side of the planet (This is already in place - beginning in 2008, scientists have been working on creating an artificial sun using nuclear fusion technology).
2111 – People become living robots.
2123 – The war between small nations. Big nations do not intervene.
2125 – Hungary will receive signals from space.
2130 – Colony under water (with the help of sympathetic councils or aliens).
2164 – Animals turn half-human.
2167 – A new religion.
2170 – Major global drought.
2183 – A colony on Mars becomes a nuclear power, and demands independence from the Earth (like when – the United States from England).
2187 – Two major volcanoes will be successfully stopped from erupting.
2195 – Sea Colony fully developed, abundant energy and food.
2196 – Complete mixing of Asians and Europeans.
2201 – Temperatures drop as the sun’s thermonuclear processes slow down.
2221 – In the search for extraterrestrial life, humanity comes into contact with something terrible.
2256 – Spacecraft forgotten to Earth brings a terrible new disease.
2262 – Planets gradually change their planetary orbit. Mars is threatened by comets.
2271 – Restart physical constants are changed. (Laws of physics changed?)
2273 – Mixing yellow, white and black races. New race.
2279 – Power from nothing (probably from a vacuum or a black hole).
2288 – Travel back in time (Time Travel invented?). New contacts with aliens.
2291 – The sun cools. Attempts were being made to light it again.
2296 – Powerful eruption on the Sun will change the force of gravity. Beginning to fall old space stations and satellites.
2299 – In France, guerrilla movement against Islam.
2302 – New important laws and secrets of the universe revealed.
2304 – Secrets of the Moon revealed.
2341 – Something terrible will approach Earth from space.
2354 – An accident on one of the artificial suns will result in more drought.
2371 – The great famine.
2378 – A new fast-growing race.
2480 – Two artificial suns will collide and leave the earth in the dark / twilight.
3005 - There will be a war on Mars. It will change/violate the trajectory of the planet.
3010 – A comet will hit Moon. A ring / zone of stones and dust will encircle the earth.
3797 – By this time on Earth killed all life, but mankind will be advanced enough and able to lay the foundations for a new life in another stellar system.
3803 – A new planet is populated by little. Fewer contacts between people. Climate new planet affects the organisms of people – they mutate.
3805 – The war between humans for resources. More than half of people dying out.
3815 – The war is over.
3854 – The development of civilization virtually stops. People live flocks as beasts.
3871 – New prophet tells people about moral values, religion.
3874 – New prophet receives support from all segments of the population. Organized a new church.
3878 – along with the Church to re-train new people forgotten sciences.
4302 – New cities are growing in the world. New Church encourages the development of new technology and science.
4302 – The development of science. Scientists discovered in the overall impact of all diseases in organism behavior.
4304 – Found a way to win any disease.
4308 – Due to mutation people at last beginning to use their brains more than 34%. Completely lost the notion of evil and hatred.
4509 – Getting to Know God. The man has finally been reached such a level of development that can communicate with God.
4599 – People achieve immortality.
4674 – The development of civilization has reached its peak. The number of people living on different planets is about 340 billion. Assimilation begins with aliens.
5076 – A boundary universe. With it, no one knows.
5078 – The decision to leave the boundaries of the universe. While about 40 percent of the population is against it.
5079 – End of the World.

Fascinating! Here are some Youtube videos I found of Baba Vanda sharing some of her incredible stories. Enjoy!

According to Vanga, her powers were derived from invisible creatures. Once when we were going to the place of prayer, we were met by a female slave who had a Spirit by which she predicted the future (Acts 16:16). Vanga predicted that oil will stop and the earth will rest; humans will discover a new kind of energy; cars and trains will fly; religions will unite and humanity will believe in one doctrine. Most of her prophecies are scary; some of them look like Russian propaganda. China-2018 will become the new Superpower. When will the Soviet Union be restored? Bulgaria is part of the Russian Empire-2025. According to Vanga, humanity will stop the cancer epidemic and the AIDS epidemic, but a new disease will be worse than cancer and AIDS. According to the Bible, cancers and infections love iron, the Father of Oncology explains. Thermonuclear Sun (TS) will live in granite quarry. Nuclear artillery will initiate the work of the TS. TS will eat thermonuclear fuel (deuterium, tritium, lithium deuteride and lunar helium-3). China's ambitious lunar exploration program could mean a future of Chinese dominance over the moon's helium-3 resources http://www.medicalnewstoday.com/opinions/192679 ; Vadim Shapoval

Her prophesies are not correct . World War III did not start in 2010 and no chemical/nuclear weapons have been used

Most definitely there is some inaccuracies with the dates of the events. Nostradamus too was off in his dates, however, I do find many things very accurate in her predictions. The one I'm currently watching is the one that states Obama will be the last president. I'm not sure whether that means there will never be another black president or whether Trump will create such changes that will force the government to make some changes in the way they run the country. Only time will tell.