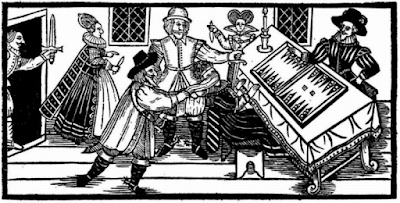 On a cold, snowy day in February 1550, the perforated body of Thomas Arden, an insignificant, aristocratic scoundrel, was discovered in Faversham, a district of London, England. He had been stabbed at least seven times. Rumors soon emerged about an obvious culprit…Alice Arden, Thomas’ wife.

Alice had been carrying on an affair with her husband’s tailor, Richard Mosbie. The two flaunted their romance openly. Alice preferred Richard over Thomas, who she detested. The only way for her to be happy was to be rid of her husband.

First, she served him poisoned milk for breakfast. After a spoonful or two, Thomas hated the taste and refused it.

This would not be as easy as she thought. She needed help. Who better than her husband’s enemy, John Green, who had lost a precious piece of land in a dispute against Thomas? The two had even exchanged blows over it. Bent on revenge, Green was a willing accomplice. For a mere ten pounds, they hired Black Will, a soldier turned highwayman and notorious murderer to help them kill Thomas.

As he walked through the church, they tried to kill him. They laid in wait for him at various locations. They tried to access his temporary lodgings in London. One day, they tried to ambush him, but they went to the wrong place. They even tried to coerce him into a duel. All these attempts failed. Of course, they had to try again. This time, she got more help – Mosbie’s sister, their daughter, and a female servant.

She hosted a dinner party. Of course, Mosbie would be there too. When all was ready, Alice sent all the servants out of the house on various errands. Mosbie and Black Will were the first to arrive. Mosbie to his place at the table and Black Will hid in the closet. A pre-arranged phrase was agreed upon so that Will would know when to jump out of the closet. All was in place.

When Thomas arrived home, he took his place at the head of the table, his back to the closet. He and Mosbie played backgammon while waiting for dinner. Finally, Mosbie uttered the phrase. Black Will rushed out, and with a towel, strangling him while Mosbie struck him with an iron. The two men dragged their victim to another room where Black Will emptied his pockets and stripped him of his jewelry. Alice then paid Black Will the ten pounds and Mosbie and Black Will escaped on horses. To make sure her husband was dead, she stabbed Thomas many times, then set to work cleaning up the blood and mess. After discarding the knife and cloth, they were ready to receive the dinner party guests.

The guests all waited for Thomas to arrive but was late so Alice served supper. Afterwards, she entertained them with music and dancing. And still no one knew what could keep Thomas from arriving home and attending such a lavish dinner party. Feigning distraught nerves, she sent her servants to search for him, sobbing, bemoaning, wailing her worries over his absence. The guests and servants went out looking for Thomas.

Alice, her daughter, and Thomas’ sister remained. They wanted to make the murder look as if Thomas had been killed outside the home. So, the trio dressed Thomas in his nightclothes before dragging his body through the garden and a gate opened into the church yard where they left him.

Soon, Thomas’ body was discovered. Why was Thomas dressed in nightclothes on such a wintry night? Fresh snow had been trampled between the body and the Arden home, revealing the body had been dragged there.

Of course, Alice was the primary suspect. The victim’s blood, hair, knife, and cloth were soon discovered. Alice was forced to confess, naming her accomplices, and the three women were arrested. Also arrested was Mosbie who was found ‘sleeping it off’ with bloody socks at a nearby residence.

Alice was tried and found guilty of murder. She and the maid were burned at the stake.

Mosbie was hanged, drawn, and quartered.

Black Will went on the run for several years. But he too, was caught and hanged, drawn, and quartered.

But their legend lives on…

Alice cursed Thomas bitterly, that the world might wonder on him.

And no grass would ever grow on the spot where Thomas Arden’s body was found.