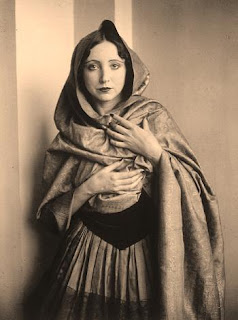 I was born in France.  My father was the composer Joaquin Nin, who grew up in Spain but was born in and returned to Cuba.  My mother, Rosa Culmell y Vigaraud, was of Cuban, French, and Danish ancestry.  I moved to the United States in 1914 after my father deserted the family.  In the United States I attended Catholic schools, dropped out of school, worked as a model and dancer, and returned to Europe in 1923.

I studied psychoanalysis and briefly practiced as a lay therapist in New York.  I was a patient of Carl Jung for a time as well.

An obscure literary figure for most of my life, when my journals -- kept since 1931 -- began to be published in 1966, I entered the public eye.  The ten volumes of The Diary of Anaïs Nin have remained popular.  These are more than simple diaries; each volume has a theme, and were written with the intent that they later be published.  Letters I exchanged with intimate friends, including Henry Miller, have also been published.  The popularity of the diaries brought interest in my previously-published novels.  The Delta of Venus and Little Birds, originally written in the 1940s, were published after my death.

I am also known for my lovers, who included Henry Miller, Edmund Wilson, Gore Vidal and Otto Rank. I was married to Hugh Guiler of New York who tolerated my affairs.  I also entered into a second, bigamous marriage to Rupert Pole in California.  I had the marriage annulled about the time I was achieving more widespread fame.  I was living with Pole at the time of my death, and he saw to the publication of a new edition of my diaries, unexpurgated.