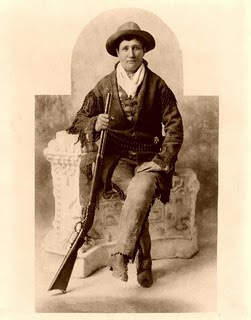 I was born in Princeton, Missouri in 1852. No one knows much about my early life, but soon after I was born, my mother died. In 1862, my family moved to Virginia City, Nevada, which was then in the early days of the boom.

An Indian uprising separated me from my father and brothers, and at the age of 10 I was thrown into the world to make my own way alone. Although I had great friends and very positive opinions of the proper things that a girl could enjoy, I soon gained a local notariety for my daring horsemanship and skill as a rifle shot.

Most people thought of me as a hard drinking woman with a preference for men's clothing. I spoke and behaved bawdily, chewed tobacco and was handy with a gun. During my life I was an army scout, a bullwhacker, a nurse, a cook, a prostitute, a prospector, a gambler, a heavy drinker and one of the most foul-mouthed people in the West. I set myself apart from other women in that I could work and socialize with hard and tough frontiersmen: from digging for gold, drinking in bars, cussing and dressing like a man, I was mostly accepted by them.

Before I turned twenty, I was appointed as an army scout under a man named Bill. In June of 1876, I partnered with him as an outrider for a wagon train, galloping into Deadwood with a shipment of prostitutes, fresh from Cheyenne.

I had unlimited nerve and entered into the work with enthusiasm, doing good service on a number of occasions. Though I never did a man's share of the heavy work, I went places where old frontiersmen were unwilling to to themselves. My courage and good-fellowship made me popular with every man in the command.

I earned my nickname in 1872 in a peculiar way. Back then, I was at Goose Creek Camp, where a small body of men were stationed. The Indians were giving us a lot of trouble, and there was much fighting.

One day the Captain was surrounded by a large band. They were fighting desperately for their lives, but were being steadily, but surely slaughtered. The Captain was wounded and had fallen off his horse.

In the midst of the fighting, I rode into the very center of the trouble, dismounted, lifted the captain in front of me on my saddle, and dashed out. We got through untouched, but every other man in the gallant company was slaughtered.

When he recovered, the Captain laughingly spoke of me as 'Calamity Jane,' and the name has clung to me ever since. 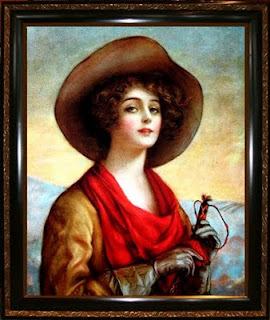 In 1876, by a daring feat, I saved the lives of six passengers on a stage coach traveling from Deadwood to Wild Birch, in the Black hills country. The stage was surrounded by Indians, and the driver was wounded by an arrow. Although the other six passengers were men, not one of them had nerve enough to take the reins. Seeing the situation, I mounted the driver's seat without a moment's hesitation and brought the stage safely and in good time to Wild Birch.

The citizens of Deadwood dubbed me the "White Devil of the Yellowstone" and "Saint" because I helped nurse the sick during a smallpox plague.

For the remainder of my days, I claimed to have been Wild Bill Hickok’s lover. But the record shows that he had just recently married and his letters home from Deadwood indicate that he was happily wedded. I requested to be buried next to Wild Bill Hickock at Deadwood, South Dakota when I died, and there I rest to this very today.

Nominate it and any other historical fiction or fact blogs you love at http://historicalnovelblogs.blogspot.com .