The History of Eggs Benedict 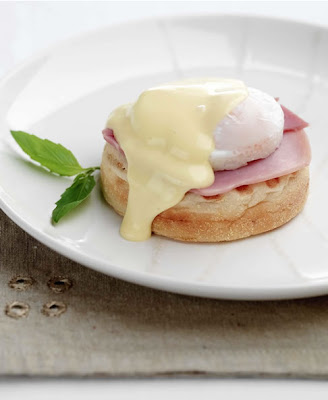 The true origins of that most popular breakfast, Eggs Benedict are in dispute. There are four versions.

The first is about a retired Wall Street stock broker named Lemuel Benedict. In 1942, the year before he died, he did an interview for "Talk of the Town" column of The New Yorker. He claimed that in 1984, suffering from a terrible hangover, he wandered into the Waldorf Hotel desperate to find a cure for his suffering. He ordered buttered toast, poached eggs, crisp bacon and a hooker of hollandaise. When Oscar Tschirky, the famous maître d'hôtel heard about the order, added it to the breakfast and luncheon menus but with a small change. He added a toasted English muffin instead of the egg and ham instead of the bacon.

The second gives credit to Commodore E.C. Benedict, a banker and yachtsman, who died in 1920 at the age of 86. Apparently, the commodore gave the recipe to his brother, who gave it to the mother of man named Montgomery and who later gave it to her son. This son actually reproduced the original recipe and gave it to a reporter of a New York newspaper.

And lastly, Mabel C. Butler of Vineyard Haven, Massachusetts in a November 1967 letter printed in The New York Times Magazine responded to Montgomery's claim by correcting that the "true story, well known to the relations of Mrs. Le Grand Benedict", of whom she was one, was:

“ Mr. and Mrs. Benedict, when they lived in New York around the turn of the century, dined every Saturday at Delmonico's. One day Mrs. Benedict said to the maitre d' hotel, "Haven't you anything new or different to suggest?" On his reply that he would like to hear something from her, she suggested poached eggs on toasted English muffins with a thin slice of ham, hollandaise sauce and a truffle on top.[4] ”

A fourth origin of the dish is suggested in Elizabeth David's French Provincial Cooking, where she describes a traditional French dish named œufs bénédictine, consisting of brandade (a puree of refreshed salt cod and potatoes), spread on triangles of fried bread. A poached egg is then set on top and napped with hollandaise. This story would also explain the distinctly French syntax, where the adjective follows, rather than precedes, the noun (although Oysters Rockefeller has the same syntax without needing a Romance-language origin). Still, it is not clear how this dish would have migrated to America, where it became popular. The combination of cod and eggs suggests it was a Lenten or meatless dish, and the use of salt cod suggests it could be as old as the Renaissance, when salt cod became more plentiful.

Mrs. Isabella Beeton's Household Management had recipes in the first edition (1861) for "Dutch sauce, for benedict" (p. 405) and its variant on the following page, "Green sauce, or Hollandaise verte", so it undoubtedly precedes the 20th century claimants above.

Popular recipes have always been shared among friends and family with the best ones becoming extremely prolific in a relatively short period of time.

Regardless, Eggs Benedict can be found almost everywhere throughout Canada and the U.S. today.
- Tuesday, December 01, 2009