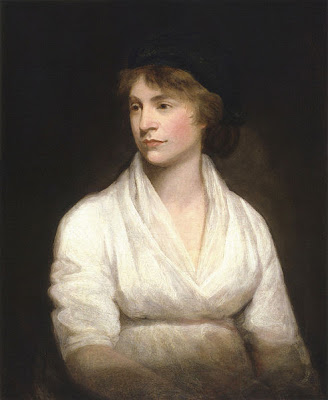 Mary Wollstonecraft was the mother of Mary Shelley, author of Frankenstein. She fell deeply in love with William Godwin, an English journalist, political philosopher and novelist. By November, 1796, Mary became pregnant with their only child, Mary Wollstonecraft Shelley. She died two weeks after their daughter's birth. Godwin raised Mary surrounded by philosophers and poets, such as Coleridge and Lamb. He also taught Mary to read and spell her name by having her trace her mother's inscription on the stone. 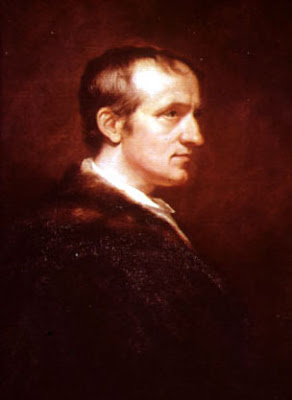 I would have liked to have dined with you today, after finishing your essay - that my eyes, and lips, I do not exactly mean my voice, might have told you that they had raised you in my esteem. What a cold word! I would say love, if you will promise not to dispute about its propriety, when I want to express an increasing affection, founded on a more intimate acquaintance with your heart and understanding.

I shall cork up all my kindness - yet the fine volatile essence may fly off in my walk - you know not how much tenderness for you may escape in a voluptuous sigh, should the air, as is often the case, give a pleasurable movement to the sensations, that have been clustering round my heart, as I read this morning - reminding myself, every now and then, that the writer loved me.

Voluptuous is often expressive of a meaning I do not now intend to give, I would describe one of those moments, when the senses are exactly tuned by the ringing tenderness of the heart and according reason entices you to live in the present moment, regardless of the past or future - it is not rapture - it is sublime tranquility.

I have felt it in your arms - hush! Let not the light see, I was going to say hear it - these confessions should only be uttered - you know where, when the curtains are up - and all the world shut out - Ah me!

I wish I may find you at home when I carry this letter to drop it in the box, - that I may drop a kiss with it into your heart, to be embalmed, till me meet, closer.

(Mary Wollstonecraft, Anglo-Irish feminist and writer, to William Godwin, philosopher and writer. She was recovering from her previous passion for Gilbert Imlay, who fathered her daughter, Fanny, and then abandoned her, after which she tried to drown herself in the Thames.)
- Wednesday, December 16, 2009

This was a really interesting post, thanks for sharing! It helped me alot with my current work on my University Journalism course.

I've been studying Wollstonecraft recently and would be grateful if you could have a quick look at my thoughts on her 'Vindication of..' passage.