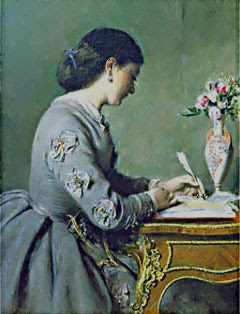 I was born the daughter of a preacher. Along with my sisters, I was raised in a small parsonage in a Yorkshire village. When I was still a child, I lost my mother. As the eldest, I assumed the role of caring for my sisters.

Our home overlooked the village graveyard. 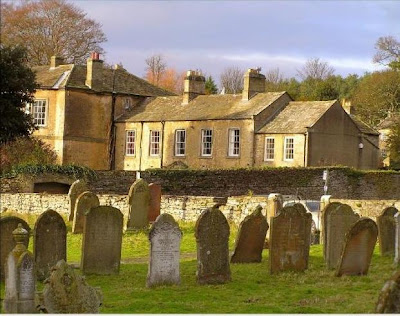 To escape from the sight of these surroundings which continually reminded my sisters and I of the loss of our dear mother, we spent our leisure time creating stories of fantasy lands. These fantasy stories often involved our strict, religious aunt. Later in a poem, I wrote: "We wove a web in childhood, a web of sunny air."

After various efforts as schoolmistresses and governesses, my sisters and I began to write. Soon thereafter we published a volume of poems under male names. Sadly, our books sold poorly, but this did not deter us.

I continued to write and completed several novels. On became an instant success and sold very well upon its release in 1854.

I married my father's curate, but after a short, though happy married life, I died in childbirth in 1855. 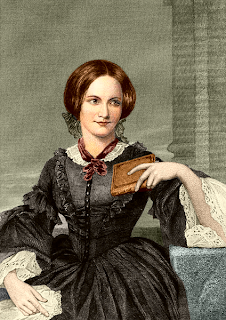 The human heart has hidden treasures, In secret kept, in silence sealed; The thoughts, the hopes, the dreams, the pleasures, Whose charms were broken if revealed.

The human heart has hidden treasures,
In secret kept, in silence sealed;--
The thoughts, the hopes, the dreams, the pleasures,
Whose charms were broken if revealed.
And days may pass in gay confusion,
And nights in rosy riot fly,
While, lost in Fame's or Wealth's illusion,
The memory of the Past may die.

But there are hours of lonely musing,
Such as in evening silence come,
When, soft as birds their pinions closing,
The heart's best feelings gather home.
Then in our souls there seems to languish
A tender grief that is not woe;
And thoughts that once wrung groans of anguish
Now cause but some mild tears to flow.

And feelings, once as strong as passions,
Float softly back--a faded dream;
Our own sharp griefs and wild sensations,
The tale of others' sufferings seem.
Oh! when the heart is freshly bleeding,
How longs it for that time to be,
When, through the mist of years receding,
Its woes but live in reverie!

And it can dwell on moonlight glimmer,
On evening shade and loneliness;
And, while the sky grows dim and dimmer,
Feel no untold and strange distress--
Only a deeper impulse given
By lonely hour and darkened room,
To solemn thoughts that soar to heaven
Seeking a life and world to come.

If the Bronte sisters had trouble selling books early on, there's hope for all aspiring writers. Thanks for an inspiring post, Mirella.

You have a beautiful blog. I can't wait to see you add more books, etc.

You write so beautifully, Mirella! I love the Brontes - many people say this but I have been reading about them and about their works for years, and am still learning.

Wasn't it wonderful that they found a daguerreotype of Charlotte a few years ago?