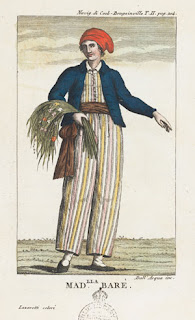 They say that the life of a sailor is for men only. They say that a woman aboard ship brings bad luck. Well, I disproved all that.

I was born into a life of poverty and was desperate to escape hardship, starvation, and a forced life of prostitution.

Instead, hungry for adventure, I dressed myself as a man and changed my name to Jean Baré.  I worked as a valet for a gentleman in Paris.

I learned about two ships that were leaving for the South Pacific from Nantes. While the ships were being provisioned, I enlisted as a valet and assistant to the expedition's naturalist and boarded the ships La Boudeuse and Étoile under the command of Louis Antoine de Bougainville 1766. The excursion was to last three years. 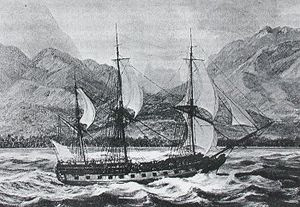 I became an expert botanist who cheerfully accompanied the botanist on some of the most dangerous, troublesome excursions over rugged terrain through jungles, forests, and swamps. Soon, my reputation of courage and strength became recognized by all.

Incredibly, my true gender remained undetected by the entire company of the expedition until we arrived in Tahiti.  As soon as we landed ashore to botanize, I was immediately surrounded by Tahitians who cried out that I was a woman. One chieftan in particular, developed an attraction for me and attempted to bed me.

After this discovery, I was confined to the ship. In a confrontation with the captain, I revealed to him the truth - that I was 26 years old, an orphan, and had been born in Burgundy. I had been forced to disguise my gender after the loss of a lawsuit had left me in financial distress.  Dressed as a man, I had previously served as a valet to a gentleman in Paris. When I learned of the expedition, it raised my curiosity.

Knowing it would be difficult to protect me from the sailors, the captain became my gallant. He promised to look after me and helped me seek a pardon from France.

It was the captain who credited me with being the first woman to have completed such a voyage in the history of the world.

How cool! A real life Jacky Faber (of the Bloody Jack Adventures by L.A. Meyer)