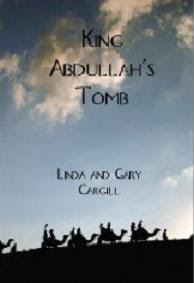 King Abdullah’s Tomb, by Linda and Gary Cargill, is an adventurous, plot-driven novel that starts on the ill-fated 1915 voyage of the RMS Lusitania. The protagonist of the story is one Dora Benley, a sharply intelligent girl with an inquisitive mind and an observant nature. Dora and her parents are traveling on the British ocean liner, whose departure is plagued by a series of threats from the Germans. The young girl spies a mysterious man rummaging through other people’s luggage and connects him to a series of suspicious events onboard, the least of which is an attack on her cabin itself. Unfortunately for her, curiosity does not come without a price. The stranger is convinced that Dora is hiding an object of great value, one he will not hesitate to kill over. With the help of a few friends, Dora escapes from his clutches, only to find that the Lusitania has been torpedoed by the Germans. But that’s only where the story begins.

As Dora tries to adjust to a new life after surviving her harrowing ordeal, she finds herself only drawn deeper into intrigue. The mysterious stranger has followed her to Britain and then on to America. While she tries to outwit the stranger, all the while waiting got her new fiancé to return from war, she realizes that her soon-to-be family is connected to the object the stranger is after.

This novel follows the quest for the enigmatic object, taking the reader from America to Britain onto Persia, and back. Although the pace of the story was, at times, slow and the plot structure chaotic, the authors bring forth the atmosphere of WWI vividly and with great detail. The Cargills use an epistolary approach to tell a story within a story, a clever device for giving us crucial information that helps connect characters and their adventures from across the world together, and bring the mystery to a satisfying conclusion. Readers will appreciate the historical research as well as a story that stays with you right until the twist at the end.

Thanks for the review. It is always nice to hear that the ending was good...sometimes that makes up for any other flaws :)