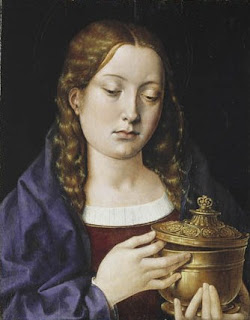 Catherine of Aragon (1485 - 1536) had the dubious honor of being the first of eight wives to Henry VIII.

She bore one child - a daughter, Mary, who became Queen of England.

But in his desire to bear an heir, King Henry divorced her in 1533.

Throughout the divorce and for a long time afterward, Catherine remained steadfastly devoted to Henry until her death in 1536, as this letter clearly demonstrates. 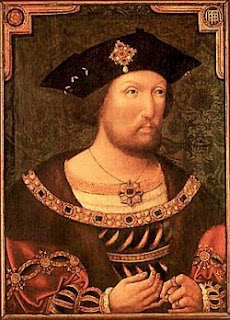 My Lord and Dear Husband,

I commend me unto you. The hour of my death draweth fast on, and my case being such, the tender love I owe you forceth me, with a few words, to put you in remembrance of the health and safeguard of your soul, which you ought to prefer before all worldly matters, and before the care and tendering of your own body, for the which you have cast me into many miseries and yourself into many cares.

For my part I do pardon you all, yea, I do wish and devoutly pray God that He will also pardon you.

For the rest I commend unto you Mary, our daughter, beseeching you to be a good father unto her, as I heretofore desired. I entreat you also, on behalf of my maids, to give them marriage-portions, which is not much, they being but three. For all my other servants, I solicit a year's pay more than their due, lest they should be unprovided for.

Lastly, do I vow, that mine eyes desire you above all things.

I really enjoy your blog! Thank you for it!

Hi Elizabeth,
I got it from a Google Image query. I loved it right away. It's much more flattering than the others.

I agree! Thanks for posting!

I thought you might be interested in seeing these beautiful iamges of Catherine at 15, as the image posted is not actually of Catherine;

Let me know what you think :D

Thank you very much, Chloe for letting me know the picture was incorrect and not of Catherine of Aragon. I've immediately replaced it with one of your two selections.

Thanks for following and for taking the time to correct that. Very much appreciated.