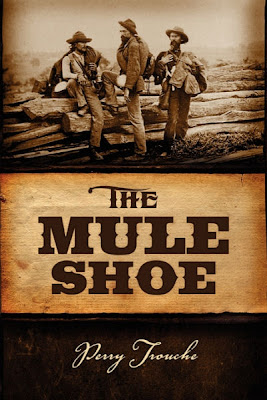 The Mule Shoe was read and reviewed by Cori Van Housen:

In The Mule Shoe, Perry Trouche paints a strange, disturbing Civil War era portrait. Rebel soldier Conner finds himself in the maelstrom of the Mule Shoe, a section of the battle of Spotsylvania, in Grant’s push toward Richmond and eventual southern defeat. Aided by the author’s impressive, sometimes poetic, command of language, Conner moves through a grotesque landscape of battlefield nightmare transposed over a background of personal brokenness and generational madness. Trouche’s grisly descriptions of bullet, mortar, and bayonet carnage utterly deglamorize the glory of battle, and capture the ragged hopelessness of Lee’s dwindling forces.

In Conner’s internal world, voices of the dead and the living, both past and the present, continually plague him: a long dead grandmother, family, childhood friends, and fallen comrades. As the horrors of battle escalate, the volume and intensity of his demons increase—most taunting, some outright abusive—until it becomes difficult to separate the real from the imaginary.

Trouche concocts some wonderfully idiosyncratic characters. In one scene, half-starved rebels superstitiously latch lizards onto their ears because, “Yank’s is a scared a lizards too. And the man who wears ‘em.” Conner, meanwhile, laments that all he has is St. Sebastian. These are The Muleshoe’s gems, and Trouche has an arsenal of them.

Since the war itself is secondary, The Muleshoe may not be for the true Civil War buff, though a basic knowledge helps. Instead, the story’s element of mystery centers on why Conner is so emotionally disturbed. Along with flashbacks which offer clues, his railing inner voices gradually peel back some of what has been at work to unhinge him from his earliest days. Ultimately, the reader must decide if the question has been satisfactorily answered. With only Conner’s eyes through which to observe, one is left with an unsettling feeling of doubt as to the reliability of his account, as to which are actual events and which are shadows.