The History of Cannoli 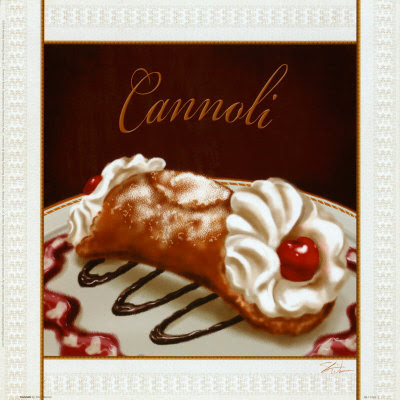 In The Godfather, Part I, the character Pete Clemenza orders the other guy in the car after a murder has been carried out to leave the gun and take the cannoli. While this line has been parodied and repeated a thousand times, what exactly is a cannoli? 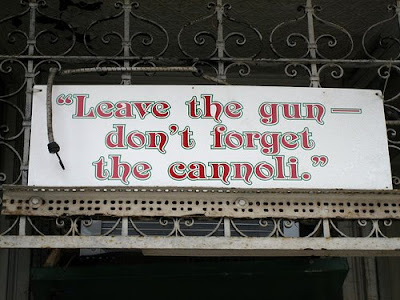 A cannoli is a Sicilian pastry dessert that is an essential part of the cuisine of Sicily. They are fried, tube-shaped pastry shells filled with a sweet, creamy filling. These treats have a long and storied history and just as many variations.

For traditional cannoli, the filling is made of ricotta cheese or even sweetened marscapone. This cheese is blended with a combination of vanilla, chocolate, pistachio, Marsala wine, rosewater, or any other of assorted flavors. In addition, the size of the cannoli varies as much as the filing's flavorings. The shell is made of flour, butter, sugar, and a number of other ingredients. This dough is then rolled into ovals and wrapped around a dough ring and fried. Following the frying process, the shells are stuffed using either a spoon or a pastry bag. The pastry can be as small as the finger-sized cannulicchi to fist-sized offerings from Piana degli Albanesi, a town near Palermo which has three languages, an Albanian dialect, Italian, and the local Sicilian dialect.
Cannoli originated in Palermo and the surrounding areas. They date to the time when Sicily was controlled by the Arabs. Historically, the pastries were made for the Carnevale, the festival season which occurs immediately before Lent. The festival is typified by parades and masquerades, something like Mardi Gras. It is thought that the cannoli might have been a fertility symbol during the season. Now, however, cannoli are enjoyed year round across Italy and in the United States. 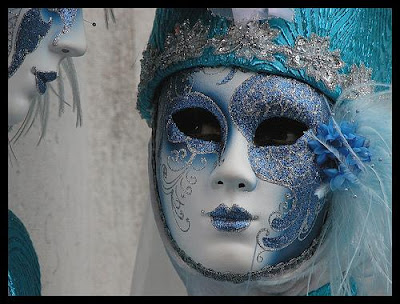 Americans who love cannoli might be more familiar with variations of the original than the original. This is probably partially due to the modifications that were made to the recipes by Italian immigrants once they got to the United States. In many instances, crucial ingredients were less available in the United States than they were in Italy. This may be why most cannoli made in the United States rarely feature marscapone. Cannoli do still contain ricotta. In other areas, the filling may be a sugar, milk, and cornstarch custard without any cheese.

When buying or making cannoli, it is important to remember that they must be consumed quickly. If they are left to sit, the shell will absorb some of the liquid from the filling and quickly turn soggy and lose its crispness.

Divide dough in half. On lightly floured surface roll each half to slightly less than 1/8-inch thickness. Using a knife and paper pattern, cut dough into ovals 6 inches long and 4 inches wide.Â Beginning with long side, roll dough loosely on cannoli tubes. Moisten overlapping dough with egg white; press gently to seal. Fry in deep hot oil(375 degrees) for 1 to 2 minutes. Drain. When cool enough to handle, remove cones from tubes and cool. Cool tubes before reusing. Up to 1 hour before serving, fill cones using a pastry tube to force cheese mixture into cones. Sift powdered sugar atop.
Makes about 20 cannoli.

If you would like more information on cannoli or other desserts, please visit http://desserts.cdkitchen.com/.
Article Source: http://EzineArticles.com/?expert=Joseph_Devine

I saw these at the festa we visited yesterday, but I resisted temptation. Maybe I should have had one after all.

love cannoli's..hate when they used to put those little citrus things in them (like the fruit on a fruitcake), i like them much better with chocolate chips!

This sounds incredibly tasty! There is nothing better than yummy cannoli made just right.

This sounds yummy! There is nothing tastier or sweeter than a cannoli made just right!

I love cannolis, they are wonderful, it is really nice to see the history behind such a nice desert.

Thoughts of a Career Woman

Fabulous post about one of my favorite things in the world! I too disliked the ones I grew up that had the lemon bits in them. Much better without - any way you make them though they are a primo dessert!

My God, that made me hungry. LOL

My grandmother used to put chocolate chips on the ends of her cannoli. The best non-homemade cannoli come from Mike's Pastries in Boston. They even deliver. We used to eat them at Christmas.