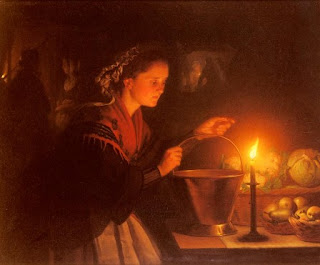 Since candles were invented, their usability in human culture and societies continues to diversify. At the beginning, it was only about the light. But at that time light was very essential for human existence. And it would not be wrong if I say that candles provided the base of today's modern world. And according to National Candle Association now there are more than 300 candle manufacturers in the U.S. alone.
Earliest use of candles is associated with ancient Egyptians. Dated from the 4th century B.C., Clay candle holders have been found in the Egypt.  In the early stage there was no wick, they were made up of tallow of sheep and cattle as it became hard.
A tallow candle, to be good, must be
Half sheep's tallow and half cow's.
That of hoggs makes them gutter,
Give an ill smell and a thick black smoak
Author Unknown - 18th century

According to the research on ancient civilization, Roman Empire invented first candle wicks. They melted the tallow to a liquid state and poured it over the cotton fiber, flax or hemp and in this way they created a wick. Although these were good enough for little light but tallow creates smoke and bad smell while burning, so this was the problem. 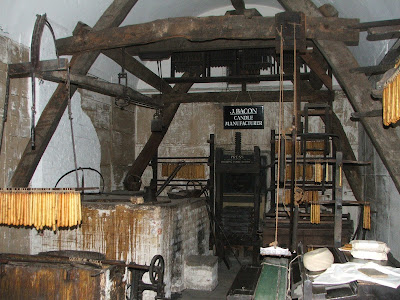 Tallow candle making room in a castle
Asians were smart enough that they started extracting the wax from insects, plants and seeds. Between 618 AD and 907 AD, Chinese discovered the use of beeswax. In the early Indian culture they extracted wax from boiling cinnamon. This wax helped in creating the tapered ones. At that time these were mainly used at Indian temples. 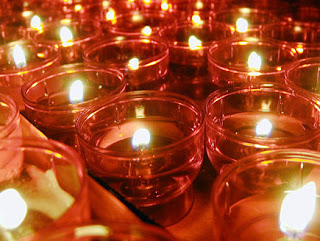 Native Americans used the oily fish as candle in the first century A.D., these fishes were called candlefish. Afterwards it became more common among all the human civilizations; both beeswax and tallow made were produced. According to some historians, spermaceti wax was used for first "Standard candles". Mass production of the candles started in 1834. A machine was invented by Morgan that used a cylindrical piston that ejected solid candles in their molds.

Fascinating subject. I love candles. Sometimes, when I'm alone in my room, I light some just for pleasure. They gime lots of inspiration!

I love candles too and they have an innate attractivelness I think. Lovely piece.

How interesting! I like lighting two or three when I'm having a relaxed bath...
Kisses,

You have a flair for finding the perfect illustration! I can't take my eyes off the ruby glow of that painting.

And by odd coincidence, I just put up an episode where someone is lighting candles around someone ill.

Thanks for the feast for the eyes.