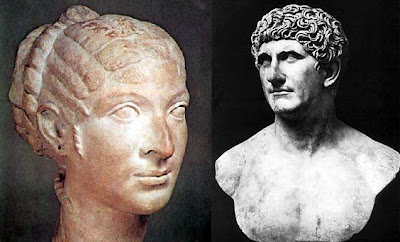 The Legend of the love story between Marc Antony and Cleopatra was immortalized by William Shakespeare.  It has endured and fascinates to this day.
When Marc Antony's duties took him to Egypt, me met Queen Cleopatra and was immediately beguiled.  The spell she weaved over him was intense, and Marc Antony soon began to neglect his duties in order to be with her.  While he dallied with the Egyptian queen, Rome was in turmoil and his wife in Rome died. 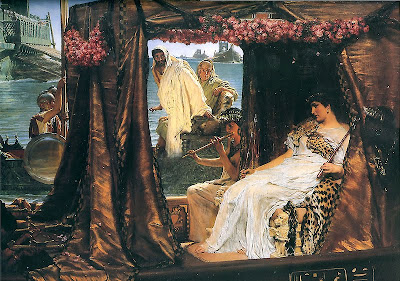 He is called back to rome from Alexandria to battle Sextus Pompey, Menecrates, and Menas, three notorious pirates of the Mediterranean.  But Cleopatra is heartbroken and she repeatedly begs him not to go.  All Marc Antony can do is reaffirm his love for her, but he is firm - he must go.
In Rome, Agrippa pushes for Antony to marry Octavius Caesar's sister, Octavia, in order to cement the bond between the two men.  Reluctantly Atony weds Octavia but Antony's lieutenant knows that Octavia can never satisfy him after Cleopatra.
Age cannot wither her, nor custom stale
Her infinite variety: other women cloy
The appetites they feed, but she makes hungry
Where most she satisfies.

A soothsayer warns Antony that he is sure to lose if he fights Octavius.
In Egypt, when Cleopatra learns of Antony's marriage to Octavia, she takes furious revenge upon the messenger that brings her the news.  But her courtiers assure her that Octavia us ugly, short, low-browed, round-faced and has bad hair.  This soothes Cleopatra's temper.
Antony clashes with Octavius and Antony returns to Alexandria, he crowns Cleopatra and himself as rulers of Egypt and the eastern third of the Roman Empire.  He accuses Octavius of not giving him his fair share of Pompeii's lands.
Antony prepares to battle Octavius, and although warned not to battle at sea, Antony refuses.  Cleopatra pledges her fleet to aid Antony, however, during the battle, Cleopatra flees with her sixty ships, and Antony follows her, leaving his army to ruin.  Ashamed of what he has done for the love of Cleopatra, Antony reproaches her for making him a coward, but also sets this love above all else, saying "Give me a kiss; even this repays me."
Octavius sends a messenger to ask Cleopatra asking her to give up Antony and come over to his side.  While Cleopatra flirts with the messenger, Antony discovers them.  He orders the messenger to be seized and whippped.  The lover's spat cools and later, he forgives Cleopatra and pledges to fight another battle for her, this time on land.
Antony is winning the battle until Octavius shifts it to a sea-fight.  Once again, Cleopatra's ships desert him.  He is forced to surrender and publically denounces Cleopatra who has betrayed him once again.  He is determined to kill her.
But Cleopatra wants to win back Antony's love, so she sends him word that she has killed herself, dying with his name on her lips. She locks herself in her monument, and waits for Antony to come to her.
Unfortunately for Cleopatra, her plan backfires.  Saddened by the news of her death, Antony decides that his own life is no longer worth living.  He succeeds only in seriously wounding himself, prolonging his death.  When he learns that Cleopatra is alive, he goes to her monument, but dies in her arms.
Octavius attempts to convince Cleopatra to surrender.  She refuses.  But Cleopatra is betrayed and the Romans seize her.  Cleopatra resolves to kill herself, using the poison of an asp. 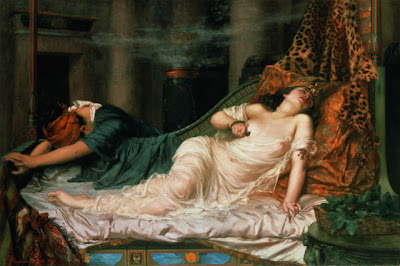 She dies thinking of Antony who she hopes to meet in the afterlife.  Her serving maids also kill themselves. When Octavius discovers the dead women, he experiences great emotion.  Antony's and Cleopatra's deaths cleared the path for him to become the first Roman Emperor.  He ordered a public military funeral for them both and buried them together.

I love cleopatra and her story! thanks for posting!