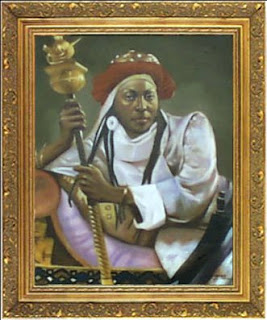 Amina of Zaria
(1533 - 1633?)
Queen
Warrior
Amina was born around 1533 in Zaria, a province of today’s Nigeria. She was the daughter of Bakwa of Turunku. Their family's wealth was derived from the trade of leather goods, cloth, kola, salt, horses and imported metals.

When Bakwa died in 1566, the crown of Zazzua passed to Amina’s younger brother, Karama. Their sister, Zaria, fled the region and little is known about her.

Although Bakwa's reign was known for peace and prosperity, Amina chose to hone her military skills from the warriors of the Zazzau military. As a result, she emerged as leader of the Zazzua cavalry. Many accolades, great wealth, and increased power resulted from her numerous military achievements.

When her brother Karama died after a ten-year rule, Amina had matured into a fierce warrior and had earned the respect of the Zazzau military and she assumed the reign of the kingdom.

Amina led her first military charge a few months after assuming power. For the rest of her 34 year reign, she continued to fight and expand her kingdom to the greatest in history. The objective for initiating so many battles was to make neighbouring rulers her vassal and permit her traders safe passage. In this way, she boosted her kingdom’s wealth and power with gold, slaves, and new crops. Because her people were talented metal workers, Amina introduced metal armor, including iron helmets and chain mail, to her army.

To her credit, she fortified each of her military camps with an earthen wall. Later, towns and villages sprung up within these protective barriers. The walls became known as Amina’s Walls and many of them remain in existence to this day.

According to legend, Amina refused to marry and never bore children. Instead, she took a temporary husband from the legions of vanquished foes after every battle. After spending one night together, she would condemn him death in the morning in order to prevent him from ever speaking about his sexual encounter with the queen. 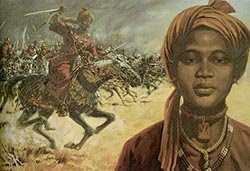 Legend also decrees she died during a military campaign at Atagara near Bida in Nigeria. Her exploits earned her the moniker Amina, daughter of Nikatau, a woman as capable as a man. Her legendary escapades made her the model for the television series Xena Warrior Princess. Today, her memory represents the spirit and strength of womanhood.

Diana de Méridor said…
I had no idea about this woman! It was great to learn about her, so thanks for sharing with us.
The problem with me is that I usually stop in Europe and don't move! I Know it's a mistake.

Tara said…
"Instead, she took a temporary husband from the legions of vanquished foes after every battle. After spending one night together, she would condemn him death in the morning in order to prevent him from ever speaking about his sexual encounter with the queen." Wow!! I'm reminded of the praying mantis... Awesome information. I hope someone writes a historical adult novel about her. I will check out that link you posted tho for that book. I love reading about women like this.
Aug 13, 2010, 12:27:00 PM

Tracy Falbe said…
Wow, I've never heard of this woman. Thanks for finding this information. Fact is always more interesting than fiction.

That's a freaky touch on her part to execute her temporary husbands. There's a strategy for getting the men to leave you alone. I wonder if she ever actually had sex with any of them.
Aug 13, 2010, 2:09:00 PM

The Bookworm said…
How interesting! wonderful post.
I hadnt heard of her before. Amina does sound like a fascinating woman.
I do feel bad for her temporary husbands!
http://thebookworm07.blogspot.com/
Aug 14, 2010, 10:13:00 AM

Emrys Eustace, hygt Broom said…
Tara said she's reminded of praying mantises... but it's Tales of the Arabian Nights that this really tickles in my memory.

Anonymous said…
wow, i love this story about amina..i've alwayz wanted to learn more about this woman..i am named after her.my first name iz zaria and my middle name is amina but im african american with indian though.my mom had alwayz told me stories about her when i was little.she even gave me a poster with her picture and a biography about her.she inspires me for the simple fact that me and her is just alike,well at least not with the killing my temporary husbands haha.i would love to name my future kids after a name like her someday.ithink her name is very powerful n unique.
Apr 1, 2011, 11:33:00 AM

nilten101 said…
Hello All! about her death in a military campaign is not exactly true though there many conflicting stories about Queen Amina of Zazzau. I will like to add a little piece of the story that lead to her disappearance to the summarized story, and it may fascinate the adult readers cos it has to do with one of her lovers she wasn't able to kill after making love to; A story is been told about a rich, wise, and cunning Arabian trader who heard about the queen and made his way to her with his wealth and influence he was able to make his way in her seduced and made love to her and he left swiftly in the mid of the night immediately after they made love when she was exhausted and still asleep and with the help of his inside men in her palace his made his way out.... its quite a long story I know this cos am a Nigerian I will make time to get more detail of this episode of her story thank you
Dec 20, 2012, 6:08:00 PM

Mirella Patzer said…
Thank you for adding to this fascinating story. She truly was remarkable in her ruthless courage!
Dec 21, 2012, 1:41:00 PM

TOP ENTERTAINMENTS said…
Hello! Something is missing or I would say not right, Amina of Zazzau never died in a military campeign. Nobody, i repeat no human know if she died or not. She just disapeared with no trace, I know this because am from The same state of Nigeria she lived.
May 22, 2013, 4:29:00 AM

Mirella Patzer said…
Thanks for your update, Top Entertainment. Glad to know she simply disappeared and never was found again. I like that ending better than the one saying she died in a military campaign. Funny how history can sometimes be distorted. I appreciate you taking the time to clarify.
Sep 9, 2015, 11:55:00 AM

Tamizh said…
There are great women in the history still living the hearts of us even without taking elixir of immortality
Jul 18, 2016, 1:31:00 AM

Team of said…
Well said, life is the most beautiful thing that any human being would like to concentrate on.But no one achieved in their way to discover the secret on How to become immortal , and it is merely impossible to achieve immortality.
Aug 27, 2016, 10:28:00 AM