The Most Hated Woman in Mexico by Colin Falconer

Author Colin Falconer is back to share a post about a fascinating Mexican woman of history depicted in his best-selling novel, Aztec. If you haven't had a chance to read this book, you must. It's a definite page turner with plenty of shock and awe to rivet you to the end. Following is the guest post. Oh, and there's a link to a previous post contained within. When you get to it, check it out. You'll laugh till you hurt!

THE MOST HATED WOMAN IN MEXICO

Hernan Cortes  was probably one of the greatest of the conquistadores – which is a back handed compliment in a way, like being the best of the Nazis or being named Terrorist of the Year. He was a man of ruthless genius, a Christian crusader possessed of unparalleled greed, even for those times – but his achievements were breath-taking. He won a land of almost limitless resource for Spain with an army of less than five hundred Spaniards, not all of them soldiers and not all of them loyal, while ostensibly on a simple scouting mission from Cuba.

He did not defeat the Aztecs with Spanish force of arms – he was five hundred men against a nation of a million – but with an astonishing bluff. He took the pot and the game with nothing in his hand. Through good fortune, steely determination, and the help of a Mexican slave girl he achieved what would otherwise have been considered impossible.

It is one of the great stories of history, a triumph of human endurance and determination, notwithstanding that Cortes’s eventual success was an unmitigated disaster for the indigenous population and resulted in unimaginable misery for hundreds of thousands of people. 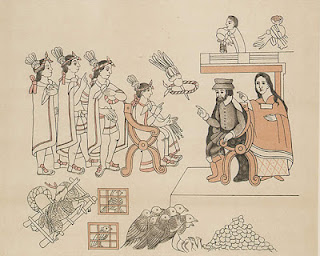 The story of Hernan Cortes is the story of a woman named Malinali. Her exact origins are unclear –she was thought to have been a Mayan princess by some – but her place in Mexican history is unparalleled. For without her, Cortes would have got no further than the beach.

Her name was corrupted by history to Malinche; even today the word malinchista is shouted across the floor of the Mexican parliament as a deadly insult – it means a traitor to the Mexican people.

Yet was she the monster that the Mexicans make her out to be?

There is only one person who ever knew the truth and that was Malinali Tenepal herself – La Malinche. Both concubine and translator to Cortes, her motives and what she said and how she said it will always be a matter of debate - it is what makes hers such a gripping and intriguing story. It is not about the battles but the love affair, one of the most extraordinary pairings in all history. 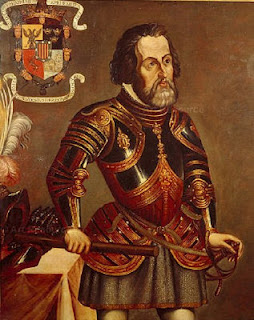 Not everyone in Mexico agrees with me on my interpretation of  Malinali – but then they don’t agree with each other either. As with  all history, there will always be a thousand versions, and no one can ever say which one is the true one.

She was also the only one to share Cortes' bed. Did she love him? No one can say. Did he use her for his own purposes and then cast her aside? Of course he did. He was only ever interested in gold and glory. 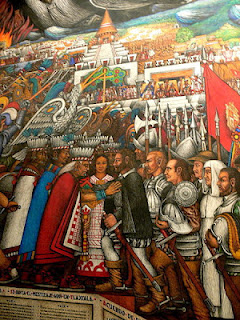 Fittingly perhaps, Cortes' life after the conquest was one of frustration and humiliation. History has not been kind to him either. I spent the better part of an afternoon trying to track him down. I finally found him not far from the Plaza Major in the Church of Jesus Navareno. He is walled up in a casket by the altar and you have to peer very hard to make out the plaque let alone the inscription. That's how much they think of him now.

He crumbles to dust in the place where he first met the Aztec emperor Motecuhzoma. And Malinali? 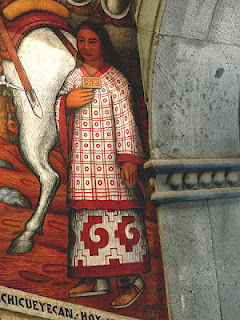 No one knows what became of her. It is believed she died an old woman in Spain. Cortes showed her his gratitude by marrying her off to someone else.  Her name is still reviled in Mexico. Foreign authors who dare write her story still get assaulted with man bags (Click here - This is the link - read it for a belly laugh!).)

But for all that, her tale, and that of the conquistadores, remains one of the most intriguing and tragic sagas in history. I still believe she could not have foreseen the terrible cataclysm she unwittingly engineered. But if you're ever in Mexico City, don't quote me on that.

If you do, watch out for man bags. 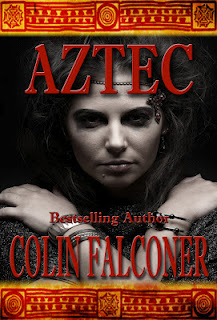 buy AZTEC ON KINDLE US or KINDLE UK