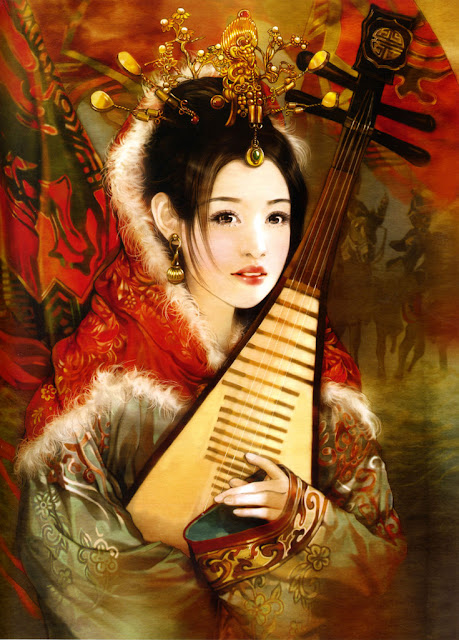 
In 33Bc during the Han dynasty there was a policy of diplomacy with the Huns, making sure that the Han dynasty and the Huns were on friendly term. This policy involves marring high class Chinese ladies with the Hun nobility so to cement the relationship of the 2 parties. Many women were forced to marry the Hun nobility but only one saw it as a positive opportunity and openly offered herself to this exchange. Her name was Wang Zhaojun and was described as one of the "Four greatest beauties" in Chinese history. The Khan of the Huns personally came to Chang an city the then capital city and asked for a court lady. Wang Zhaojun offered herself when all the other court ladies refuse because it meant leaving the known, their family and a pleasant life at court.

However unlike the Han dynasty the wife of the Kahn had a great influence and Wang Zhaojun managed to use this influence to continue the good relations between the Han dynasty and Huns. During her life the Hans and the Huns never had a war.


A famous musician with great knowledge and elegancy, Cai Wenji was famous in the eastern Han dynasty for her musical talent and skill in calligraphy. She broke out of the conformed role of the female in ancient china and managed to get status and riches. Her life changed one night at the age of 6 when she was woken up by her father, who also was a musician, playing music. She listen intently as her father,Cai Yong, played a stringed instrument. Suddenly the music stopped with a awful sound, as one of her father's strings broke. Cai Wenji went to her father and proclaimed that the second string must have been broken. Cai Yong was shocked to see his daughter up and the late hour but also to see her guessing correctly at the string that was broken. Her Father first thought that she must have been lucky, so he broke another string and tested her again.

Again Cai Wenji told her father which string was broken. Her father gathered all the instruments in their house and spent the rest of the night testing her musical talent. In the morning Cai Yong made a decision to teach Cai Wenji everything he knew about music. Due to her great talent and her father's training Cai Wenji went on to become a famous musician.

Hi Mirella! Thanks for this. When I lived in China, I often heard mention of the 4 Great Beauties, but never heard their stories!