THE FACE THAT LAUNCHED A THOUSAND SHIPS

HELEN OF TROY
by
Colin Falconer

It could be just another day in Washington or Hollywood; instead these are the key ingredients in a story that happened over three thousand years ago, in the Middle East.

The tale was inspired by one of the most beautiful and enigmatic characters in all history; her name was Helen. 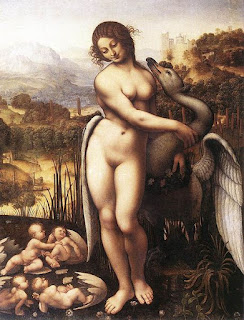 Her father was Tyndareus, King of Sparta. Or was he? Others say she was sired by a god, one dedicated to the torment of all mankind - Zeus. It is said that he slept with her father’s queen, Leda, while disguised as a swan.

Another legend claims her mother was the goddess Nemesis, who turned into a goose to try and escape Zeus's attentions. So he transformed himself into a swan in order to ravish her. She then left the egg with Leda.

But however she was conceived, she grew to become the most beautiful woman in the world; and when she was of a marriageable age, Tyndareus looked for a suitable husband for her.

Every prince and hero in the Greek world competed for her hand and with great prescience, Tyndareus made them all swear an oath to assist the eventual winner should Helen ever be stolen.

He then sold her to the highest bidder - Menelaos. 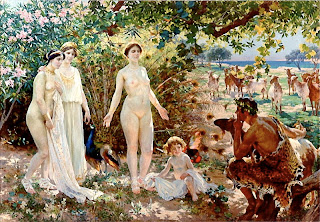 But Zeus had not finished plotting. He organized a beauty contest among three rival goddesses; Hera, Athena and Aphrodite. He then named a mortal Trojan prince named Paris as the judge.

Paris chose Aphrodite and she rewarded him with Helen as her part of the bargain. It didn’t matter to her that Helen was married - that was a problem for mortals, not for gods.

Paris went to Sparta under the guise of a diplomatic mission and when Menelaos left for a brief visit to Crete, he claimed his prize and abducted Helen. Some stories say Helen went willingly, seduced by Paris's charms; others claim that he kidnapped and raped her.

Whatever the truth, when Menelaos discovered that his wife was missing, he was enraged by this abuse of his hospitality. He called upon all the other Greek princes to fulfill the oaths they had made, and help him get her back.

An armada set sail for Troy - Helen thus became 'the face that launched a thousand ships.'

The war against Troy lasted 10 years, and laid waste the surrounding land, (now part of western Turkey), costing thousands of lives. During this time Helen grew disenchanted with Paris; his brother, Deiphobus, took her as his paramour when Paris was killed.

In the Iliad, Homer paints Helen as a poignant and tragic figure, filled with self loathing for the destruction she has caused. The Trojans have come to hate her: ‘no longer have I anyone beside in broad Troy that is gentle to me or kind; but all men shudder at me.’

Other ancient writers describe her as treacherous, claiming she signaled to the Greeks when the Trojan Horse was admitted to the city, and then hid her new husband's sword when the city was overrun, thus leaving him to the mercy of Menelaos.

When Menelaos finds her, he raises his sword to kill her; but, at that moment she lets slip her robe and the sight of her beauty makes him drop his sword, all thoughts of revenge forgotten.

Her fate is cloudy; some say she sailed back to Greece and lived a long and happy life as the wife of Menelaos; others that she sought exile on Rhodes, and was lynched.

Her precise role in the fall of Troy is a matter of legend rather than historical fact. In this way, the interpretation of her role has served  as a mirror to society’s view of women through history, rather than a view of Helen herself.

Since ancient times she was blamed for her extraordinary beauty and the effect it had on men. Beauty then was her curse, while it was also vindication for the actions of the men around her.

But when we look at the story and Helen’s actions, none of it was her doing; she was first sold to the highest bidder by her father, then abducted from her home at the behest of the gods. The story makes her never more than a puppet in the machinations of men and of heaven.

Yet she is portrayed as the type of woman that all other women should envy and therefore hate; and that all men should fear and yet desire.

The story thus remains as fresh and relevant today as it was three and a half thousand years ago, when it was whispered around the fires of more ancient times. 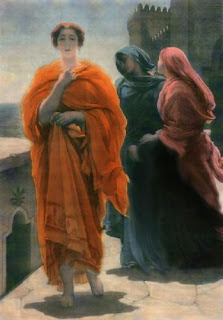 "Was this the face that launch'd a thousand ships ...
Sweet Helen, make me immortal with a kiss."
... Christopher Marlowe (Faust, 1604)

Does beauty bestow immortality and happiness? If we look into the haunted face of Helen of Troy, we find our answer.

Hers is indeed one of the greatest stories ever told.