History often reads a lot like “his story” - a list of exploits from the men who came, saw and conquered. It has its fair share of powerful female rulers: Hatshepsut, Cleopatra VII and Elizabeth I. A consistent theme is that most of these women lived in the sway of male influences, until they met tragic, lonely ends. Women have exercised limitless influence in some of the most unexpected places.

At a time when most Muslim women lived veiled and secluded in harems, many remarkable females made their bid for power. One among them was Razia, the eldest daughter of Sultan Iltutmish, who reigned in Delhi for 16 years until 1236. Educated and with a strong interest in politics, she became her father's regent during his campaigns.On his deathbed, Iltutmish expressed his wish that Razia would rule in his stead, but this command offended the Indian nobles. Iltutmish insisted. “My two sons have given themselves up to wine, women, gambling and the worship of flattery. Government is too heavy for their shoulders to bear. Razia, though a woman, has a man's head and heart and is better than twenty such sons.” 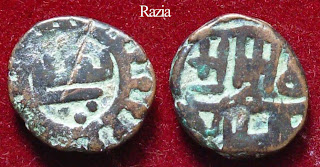 In defiance of their father's decree, Razia's half-brother Rukn-ud-Din Firuz, supported by the nobles and factions loyal to his mother Shah Turkaan, took the throne.Six months into the new ruler's reign, Razia appeared before the congregation at Friday prayers and spoke of the excesses of her half-brother. He was assassinated along with his mother. Supported by the masses, Razia ascended the throne of Delhi at the age of 31. During her four-year reign from 1236, silver coins issued in her name bore her official title “Jalauddin” but she referred to herself as “lmadatun Niwan”, which meant the Great Woman. Razia Sultana dressed like a man and rode an elephant through Delhi with her face unveiled. 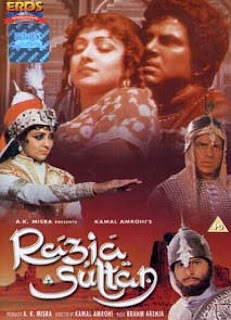 Rumors about her close relationship with an Ethiopian slave, Jamal-ud-Din Yaqut, caused her downfall. Her governors rebelled on the suspicion that her slave was her lover. They forced Razia to marry Malik Atunia, the governor of Bhatinda. However, the second of her brothers, Muizuddin Bahram Shah, usurped the throne. Razia and her husband died fighting against him in October 1240. Her final resting place remains a source of controversy; there are at least three sites where her body could have been interred. Legends surrounding Razia have made her popular in Indian culture; the 1983 Urdu film Razia Sultan is a fictionalized account of her life, as is Rafiq Zakaria's novel, Razia: Queen of India.

I'd never heard of her before, Lisa. Never read anything about this period in Indian history either. Great post.

Fascinating post! I had never heard of her before- one can only imagine how difficult it must have been to rule as a woman in that era, in those lands...Wonderful!

What a fascinating woman, Lisa! Can you recommend any good nonfiction books about her? I'd love to learn more.

Thanks Colin. You and I have enjoyed researching and writing about strong Muslim women, who behaved in completely unexpected ways given their seclusion behind harem walls.

Thanks Ms. Lucy, I love these kinds of posts too, especially since women have already been characterized as the "weaker" sex - the women I'll profile were anything but weak.

Thanks, Sam. Zakaria's book is the only one I'm aware of, but I can check the bibliography of the texts I used for info on Razia. I'll let you know!

Honestly! When it comes to blogs about and/or for women, this blog is like ... the best blog ever!!!

FIRST INDIAN WOMAN MUGHAL EMPRESS SULTANA RAZIA ! SHE IS BRAVE POLYTICION WISE AND TELENTED EMPRESS OF DELHI ! I LIKE HER WORK AND I LIKE GOOD SULTANA RAZIA.

Thanks you sooo much this thing helped me in ma article :) and razia is an amazing women