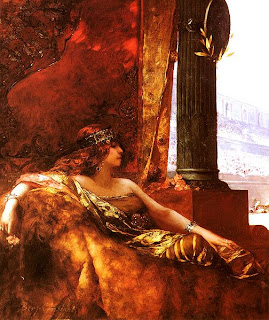 She was born in the year 500, though history is unsure where. Her father trained bears; her mother danced bare. Yet she grew up to marry an Emperor and become one of the most renowned and respected women in history.

The main historical reference for her life is a contemporary scribbler called Procopius; he wrote three accounts of her life, and they all contradicted each other. So our main source is completely unreliable.

But we do know that when her father died, Theodora, her mother and her two sisters were rendered destitute and that she and her three sisters followed her mother into a Constantinople brothel. The terms of her employment would have included exotic dancing on stage and providing sexual services off it.

But Procopius goes further, alleging that she entertained ten men at a time, and when she’d exhausted them would then satisfy their thirty slaves as well. And though she flung wide three gates to the ambassadors of Cupid, she lamented that nature had not similarly unlocked the straits of her bosom, that she might there have contrived a further welcome to his emissaries.

I’m not sure I believe him there. He sounds very much like a rancorous or jilted lover.

What we do know is that at sixteen she accompanied a functionary called Hecebolus to North Africa where he took up the position of governor of Pentapolis. But he beat and abused her so after four years she left him and lived for a while in Alexandria, where she converted to Christianity.

So when she returned to Constantinople in 522 she gave up geese and pierced bosoms and settled for life spinning wool near the palace. It was here that she attracted the attention of the emperor’s nephew, Justinian. It wasn’t a casual affair; Theodora was not only beautiful, she was also smart and amusing and he wanted to marry her. But the law forbade high born men marrying actresses - even after they had renounced geese.

So when Justinian took the throne in 525, he simply repealed the law.

He showed great foresight. Historians agree that it was Theodora's courage and decisiveness that later saved Justinian's reign.

During the Nika riots in 532, a huge mob ran amok in the city, and were about to proclaim a new emperor, Hypatius. Justinian prepared to flee Constantinople. But at a meeting of the government council, Theodora urged him to fight it out, reminding him that "purple makes a fine shroud" - meaning it would be better to die fighting as an emperor than to run away and live the rest of his life as an exile.

Justinian rediscovered his nerve. He ordered his loyal troops to attack the demonstrators in the Hippodrome and after fierce fighting they killed over thirty thousand of them.

He kept his purple and never forgot that it was Theodora who had saved his throne.

After the revolt, Justinian rebuilt Constantinople and made it the most splendid city in the world; even today the Hagia Sophia remains one of the great architectural wonders. 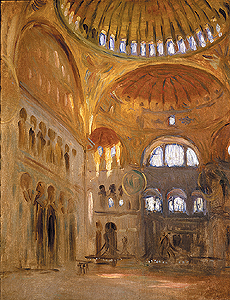 He treated Theodora as his equal and she used her influence to affect real change in the empire. She had laws passed that prohibited forced prostitution; she created a convent called the Metanoia (Repentance), where the ex-prostitutes could support themselves. She also expanded the rights of women in divorce and property ownership; instituted the death penalty for rape; and established basic property rights for women right across the Eastern Empire. She also forbade the killing of a wife who committed adultery - a custom that had been legal until then.

It is why she is now considered perhaps the greatest woman in the history of the Roman Empire. As a result of her efforts, the status of women in the Byzantine Empire was elevated far above that of women in the Middle East and the rest of Europe.

Theodora died of an unspecified cancer on 28 June 548 at the age of 48; Justinian wept bitterly at her funeral. It was a remarkable life and a remarkable legacy; and sadly, her reforms are as badly needed in much of the world even today as they were then.

In the Orthodox church Theodora is one of our saints because of her faith and good works and is commemorated on November 14.

More days ago I read a book about Theodora. So far as I remember that is 'Theodora: Empress of Byzantium'.
nice book.
your article is also very nice.
Thanks,
History