Showing posts from December, 2012
Show all

If King Henry VIII were alive today, he might say... I LOVE COMMENTS
2 comments
Read more

DIANA, PRINCESS OF WALES, QUEEN OF EVERYONE 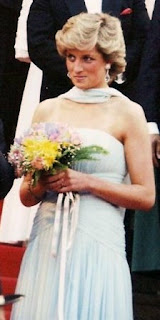 photograph: George Biard What makes a woman great? Is it celebrity, like Marilyn Monroe? Is it saintliness, like Mother Theresa? Is it political ambition, like Cleopatra? Or is it something more elusive than any of these? It is now fourteen years since Diana, Princess of Wales, died in that horrific car smash in the Pont de l'Alma tunnel in Paris, yet the anniversary of her fiftieth birthday last year saw a fresh outpouring of public grief. For a major celebrity, Diana was remarkably self deprecating: "I don't even know how to use a parking meter, never mind a phone box." Her greatest talent was in being nice to people: "I want to walk into a room, be it a hospital for the dying or a hospital for the sick children, and feel that I am needed. I want to do, not just to be." Did this make her a great woman? Her critics said no, because she never held any position of political power. But in a BBC poll she was voted third of "1
3 comments
Read more
More posts