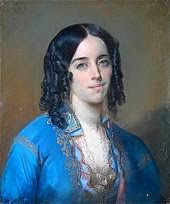 George Sand (née Amantine Lucile Aurore Dupin) (1804-1876) shone brightly as one of very few 19th century female authors. Born into a world where only men could be writers, she often imitated them in dress and manner by wearing pants and smoking cigars. She relentlessly pursued of her wants: writing, lovers, and family. Along with novels, she wrote urging reforms to better the lives of the poor and working class, gain suffrage for men and women, and capture equal rights for women.

Early in her life, she inherited her grandmother’s estate, Nohant, in Central France. Married only once, she took many lovers, including Frederic Chopin, with whom she had a nine-year affair. They shared a passion for the arts—he for the piano and she for literature—although their discussions traveled far and wide. That bond kept them together well beyond Chopin’s “usefulness” as a satisfying companion due to his debilitating tuberculosis. Although their breakup was harsh and long in coming, Sand tended to him while together as she would any child. Toward the end, she resented the encumbrance and freely admitted to several dalliances. 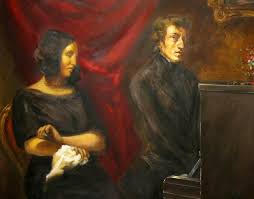 “When he was sick unto death in Majorca, he composed music imbued with the very fragrance of Paradise. I am so used to seeing him lost in the clouds that it doesn’t seem to me as if life or death means anything to him. He himself really doesn’t know on what planet he is living, and has no awareness of life as we conceive and experience it,” said Sand.

She wrote every night from midnight to six a.m., slept till noon, then took care of her children. Such a dedicated schedule resulted in many novels, plays, an autobiography, political tracts, newspaper articles, and several volumes of personal correspondence. She risked societal ridicule for doing what she wanted but is still revered in France today. Independent, gifted, and willful, she brooked no nonsense when it came to her friendships or criticism of her works.

In The Education of Delhomme, George Sand is the monarch’s bête noire because he believes her writings are fomenting rebellion among the working class. So great is the king’s fear of further turmoil that he orders his henchman to hire the main character, Beaulieu Delhomme, to spy on her. The enmity between Delhomme and Sand springs from other reasons, but her values of fairness and an unerring focus on aiding the oppressed help her overcome such discord. 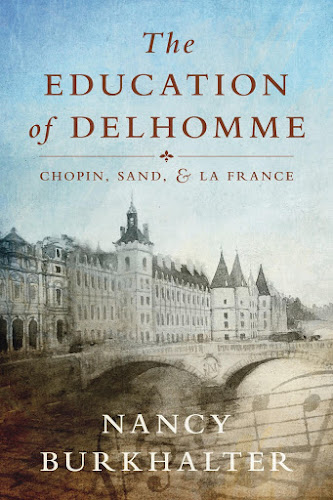 This title is scheduled for release on Nov. 17, 2020.
Amazon
Author
Nancy Burkhalter 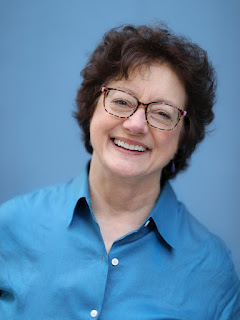 Nancy Burkhalter is an educator, writer, journalist, linguist and piano tuner. She holds a master’s degree in journalism and English education as well as a doctorate in linguistics from the University of New Mexico. She has taught composition for many years in the U.S., Germany, Saudi Arabia, Kazakhstan, and Russia. Her overseas work led to an interest in comparative education, especially critical thinking. Both observations and research resulted in her book and blog, Critical Thinking Now. In 2019, she was a recipient of Go Back, Give Back, a fellowship through the State Department to train teachers in St. Petersburg, Russia.