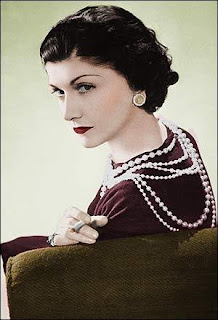 I was on the 19th of August 1883 in the small city of Saumur, Maine-et-Loire, France.  I was the second daughter of traveling salesman Albert Chanel and Jeanne Devolle.  Born in a poorhouse, my birth was recorded the following day.  Two employees of the hospice went to city hall and declared me a female child.  The hospice employees were illiterate, so when the mayor François Poitu wrote down the birth, no one knew how to spell Chanel so the mayor improvised and recorded it with an "s," making it Chasnel.  This misspelling made the tracing of my roots almost impossible for biographers when I later rose to prominence.  My parents married in 1883.  I had five siblings.

In 1895, when I was 12 years old, my mother died of tuberculosis and my father left the family a short time later because he needed to work to raise us.

Because of his work, I spent seven years in the orphanage of the Roman Catholic monastery of Aubazine, where I learned the trade of a seamstress. School vacations were spent with relatives in the provincial capital, where female relatives taught me to sew with more flourish than the nuns at the monastery were able to demonstrate.  When I turned eighteen, I left the orphanage, and took up work for a local tailor. 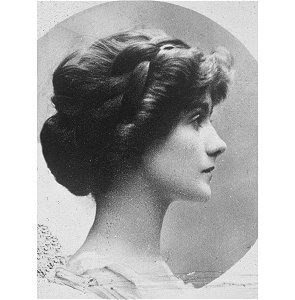 While working at a tailoring shop I met and soon began an affair with the French millionaire Étienne Balsan who lavished me with diamonds, dresses and pearls. While living with Balsan, I began designing hats as a hobby, which soon became my passion.  Our love faded and I left Balsan and took over his apartment in Paris.

In 1913, I opened up my very first shop which sold a range of fashionable raincoats and jackets.  Situated in the heart of Paris it wasn't long before the shop went out of business and I was forced to surrender my properties. This did not discourage me.  It only made me more determined.

During the pre-war era, I  met up with an estranged and former best friend of Étienne Balsan, Arthur "Boy" Capel, with whom I soon fell in love. With his assistance, I was able to acquire the property and financial backing to open my second millinery shop in Brittany.  My hats were worn by celebrated French actresses, which helped to establish my reputation. 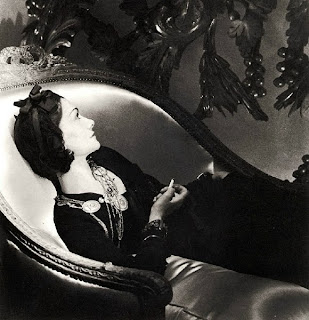 In 1913, I introduced women’s sportswear at  my new boutique in Deauville, in the Rue Gontaut-Biron.  A countess was my first aristocratic client.  My third shop and successor to my biggest store in France was located in Deauville, where more women during the World War I era came to accept my view that women were supposed to dress for themselves and not their men.

Later in life, I concocted an elaborate false history for her humble beginnings.  I steadfastly claimed that when my mother died, my father sailed for America to get rich and I was sent to live with two cold-hearted spinster aunts.  I even claimed to have been born in 1893 as opposed to 1883, and that my mother had died when I was two instead of twelve.  All this was done to diminish the stigma that poverty, orphanhood, and illegitimacy bestowed upon unfortunates in nineteenth-century France.

In 1920, I was introduced by ballet impresario Sergei Diaghilev to world famous composer Igor Stravinsky (who composed 'The Rite of Spring'), to whom I extended an offer for him and his family to reside with me.  During this temporary sojourn rumours circulated that we were having an affair. 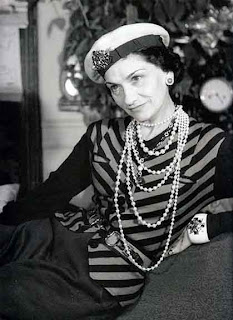 In 1923 I told Harper's Bazaar that simplicity is the keynote of all true elegance.   I always kept the clothing I designed simple, comfortable, and revealing.  Unlike most designers in Europe, I gave women a sense of freedom; I gave them back their bodies: bodies that were drenched in sweat, due to fashion's finery, lace, corsets, underclothes, padding.

I took what were considered poor fabrics like jersey and upgraded them.  My style is associated with the image of the 1920s flapper, a "new breed" of self-confident young women that challenged the established concept of socially acceptable behavior.  The flappers demonstrated their independence through new looks and attitude, such as short skirts and haircuts, openly using cosmetics, and being seen to smoke and drink cocktails. Compared to previous generations of women the flappers also showed an increased level of activity, pursuing athletic sports, driving their own automobiles, and going out to nightclubs where they could listen to jazz music and do energetic dances such as the Charleston. 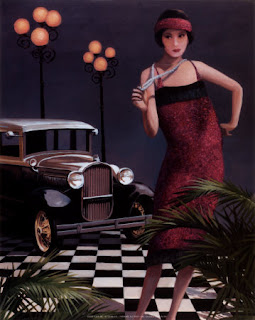 My fashions had a staying power, and didn't change much from year to year-or even generation to generation.
I came out with her first signature fragrance, Chanel No. 5, in 1921.  The perfume was the first to have a designer's name attached to it, and it has enjoyed tremendous success since its introduction.  In this way, I set the standard for successive designers to do the same.

In 1939, at the beginning of World War II, I closed my shops.  I believed that it was not a time for fashion.  I lived in the Hôtel Ritz Paris on and off for more than 30 years, making the hotel my Paris home even during the German occupation.  During that time I was criticized for having an affair with Hans Gunther von Dincklage, a German officer and Nazi spy who arranged for me to remain in the hotel. 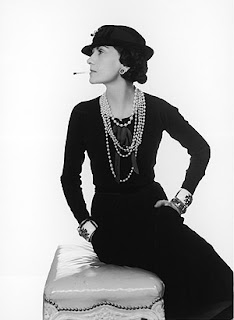 In 1943, after four years of professional separation, I contacted a former colleague and partner named Lombardi, who was living in Rome.  I invited him to come to Paris and renew our work together.  This was actually an attempt by Nazi spymaster Walter Schellenberg to make secret contact with Lombardi's relative Sir Winston Churchill.  When Lombardi refused, I was arrested as a British spy by the Gestapo.  I was later arrested and charged as a collaborator, but avoided trial due to an intervention by the British Royal family.
In 1945, I moved to Switzerland, eventually returning to Paris in 1954, the year I also returned to the fashion world.  My new collection did not have much success with the Parisians because of my relationship with the Nazis; however, it was much applauded by the British and Americans, who became my faithful customers. 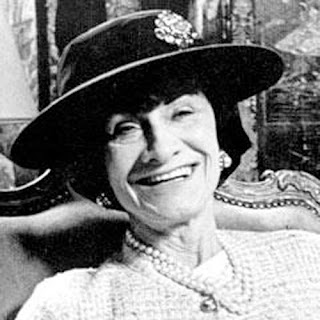 I had affairs with some of the most influential men of the time, but I never married.  When asked why I did not marry the Duke of Westminster, I said, "There have been several Duchesses of Westminster. There is only one Chanel."

I suffered a heart attack in my private suite at the Hôtel Ritz Paris on 10 January 1971, at the age of 87.  I was buried in Lausanne, Switzerland and my tombstone is carved with lion heads representing my birth sign, Leo. 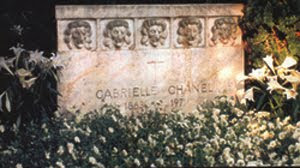 Hello Mirella Patzer
Happy new year,
I m nivetha (News Blogger), i found this blog interesting. Keep the good work.. I updating my blog with current news, Can you link to my blog http://2daynewsupdates.blogspot.com/ (Today News Updates). I hope i can satisfy our visitors with current news.
Thanks

I enjoy your blog very much! Thank you!

Thanks so much for stopping by my blog! You've got a very nice place over here as well, and I really enjoyed this article on Coco Chanel. I recently posted a piece on her as well, as she is one of my most favorite historical characters - check it out here if you'd like!

I always enjoy a visit to our site.There is so much to study!