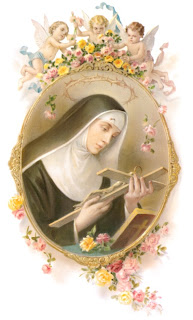 Please forgive me for the morbid post. But truly, I do find this topic fascinating. Thanks for indulging me.

Many churches in Italy house the bodies of saints which are incorrupted - that is, they have not decomposed. Incorruptibility is a Catholic belief that supernatural intervention allows some human bodies to not undergo the normal process of decomposition after death. Although it is recognised as supernatural in Catholicism, it is no longer counted as a miracle in the recognition of a saint.

Incorruptibility is seen as distinct from the good preservation of a body, or mummification. Incorruptible bodies are often said to have the Odour of Sanctity, exuding a sweet and pleasant aroma. As of yet, none of these cases have been verified scientifically.

In the Catholic Xhurch, if a body remains incorruptible after death, this is generally seen to be a sign that the individual is a saint, although not every saint is expected to have an incorruptible corpse.

When the Catholic Church recognized incorruptibles, a body was not deemed incorruptible if it had undergone an embalming. As such, although the body of Pope John XXIII remains in a remarkably intact state, after its exhumation, Church officials quickly pointed out that the pope's body had been embalmed and that there was a lack of oxygen in his sealed triple coffin.

Two main beliefs on incorruptibility exist. The first is the belief that the pious nature of the individual in some way preserved the flesh. The second belief is that decomposition was prevented by the intervention of God, or some other supernatural agent, as the body will be resurrected later. 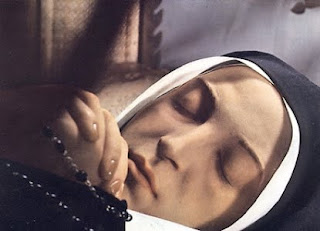 Saint Bernadette Soubirous of Lourdes
Physical causes cause might be that the corpse has been subjected to environmental conditions such that slow decomposition, likely through saponification or that the burial ground is cool and dry or if the soil is composed of certain compounds that bring the bodies' moisture to the surface of the skin. It has also been suggested that bodies with low amounts of muscle and body fat tend to resist decomposition better.

Regardless, these incorrupt bodies are eerily fascinating, giving pilgrims an opportunity to see the person almost as if they were still alive. Here are two videos demonstrating this fascinating phenomenon.

Email ThisBlogThis!Share to TwitterShare to FacebookShare to Pinterest
Labels: Saints