Helen Jewett
(October 18, 1813 – April 10, 1836)
Prostitute
Murder Victim
Helen Jewett's real name was Dorcas Doyen and she was born in Temple, Maine to a working class family.  Her father was an alcoholic and her mother died when Jewett was young.
When she was 12 years old, Helen found work as a maidservant in the home of Chief Justice Nathan Weston of the Maine Supreme Judicial Court.
As the years passed, Helen grew into a true beauty.  AT 17, she was ruthlessly seduced by an unscrupulous bank cashier.
At 18, she changed her name to Helen Jewett and moved to New York City.  It was not long before her great beauty attracted notice.  She found work in a bordello and earned a very comfortable living as high class courtesan .  One day, while she was accosted by a ruffian outside a theatre, a man by the name of Richard Robinson, also known as Frank Rivers, came to her rescue.  A bond developed and Robinson soon became a regular patron.
. 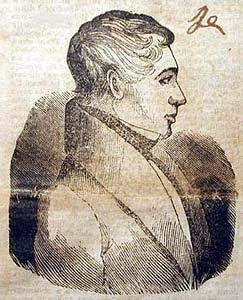 Richard P. Robinson
A profile made in 1848 by the National Police Gazette.
Courtesy of the American Antiquarian Society.
But it was a rocky relationship and the couple broke up.  Some said that it was because Helen learned that Robinson was planning to marry another woman, and she threatened him.  Others said it was caused by the fact that Robinson had been embezzling money to lavish on Jewett, and he became worried that Jewett would expose him.

On an April night in 1836, another woman in the brothel heard a loud noise followed by a moan.  She peered out into the hallway and saw a tall man hurrying away.  When the Madame of the brothel looked into Helen Jewett's room, she discovered a small fire and Helen who lay dead in a pool of blood from a arge wound in her head.  She was struck three times in the head. 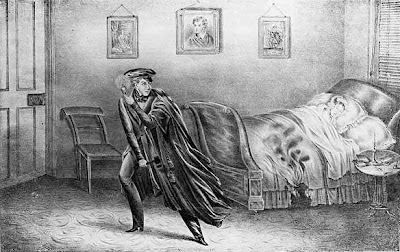 Her killer fled from the house by a back door and climbed over a whitewashed fence to escape.  The women of the brothel named Robinson as their primary suspect.
Police found him in his rented room, in bed with whitewash stains on his pants and they charged him with Helen's murder.
Robinson was charged with the murder of Helen Jewett.
The Coroner's Report revealed the murder happened sometime after midnight.  Helen was struck on the head three times with a hatchet.  Because there were no signs of struggle, the blows were unexected.  After killing her, the murderer hen set fire to Jewett's bed.  When her body was discovered, the room was full of smoke and Helen's body was charred on one side.
Robinson denied killing Jewett and didn't display any emotion.  Based on witness testimony and the recovery of a cloak that resembled Robinson's, Robinson was indicted.
On June 2, 1836, Robinson's trial for murder began. The media sensationalized it.  Because most of the witnesses were prostitutes, the judge ordered the jury to disregard their testimony.  The rest of the evidence was all circumstantial.  As a result, the jury returned a verdict of not guilty.
Jewett's murder excited the press and the public, with strong supporters for Jewett as well as Robinson.
Long after the trial, some of Robinson's personal letters surface.  They disputed some of the claims he made in court and showed that he was more than capable of sexual, deviant behavior.
Public opinion turned on him as his guilt became clear.  To escape the notariety, he fled to Texas where lived quietly until he died of a fever, murmurring Helen's name.

Gosh - sounds like it would make a good film.

Thanks for sharing another splendid nugget from history!

Good morning, Mirella! Wow...as always, such an interesting story...and one I wasn't aware of. I so love reading your posts. Sorry I haven't been by to visit much lately...still visiting my parents and others and time is just not my own!

Hope you have a most wonderful weekend!